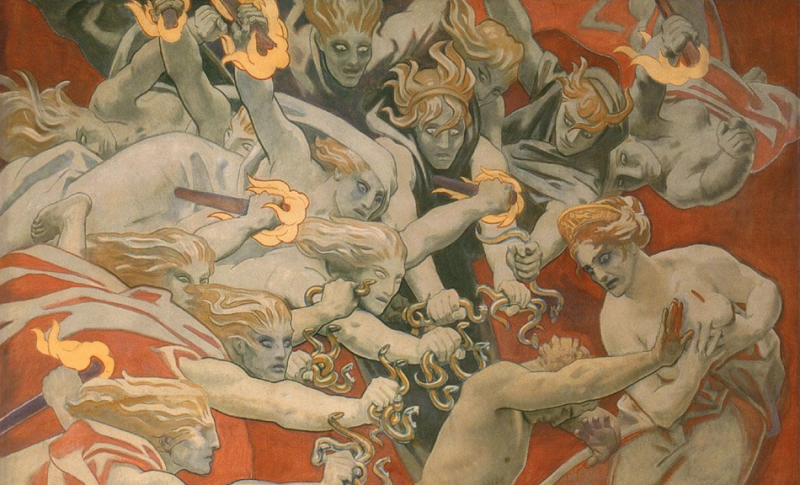 Stunned, I slid off and she got on. She was overweight and demanding, immediately thumping Val’s ribs with her chubby legs. He tried a couple of circles but he couldn’t keep going. He had nothing left. He looked at me sitting in the front row of the stands and I got what he told me…”I am going to have to throw her off…help me!” as she kept thumping. And in what seemed like slow motion to me, I vaulted over the short fence and went marching toward them like the legendary “Furies” of ancient Greek mythology. I was going to pull her off my sweating, stressed, exhausted horse and probably eat her alive. She saw me coming toward her with glazed eyes (not kidding, I was so angry) and in front of the audience said quickly “We’ve done enough now,” and slid off right before I reached her. I could barely restrain myself from a scene. And I promised Val no one would ever ride him again but me.

Terrie: Our horses (if they have granted us their trust) rely on us to treat them fairly and keep them out of danger. Good for you for being Val’s advocate.

Ursula:  I had to advocate for Luna before too, especially after I was told she should go back to the wild because she is too strong and too smart. Luna hated him and would not let him near us while I was on her.

Kip: Like being strong and smart is a problem…

Tracey: What a traumatic experience that must have been for you and Val. I’ve found over the years that this (the idea of being their advocate) has become the center of my relationship with my horses. I am not a particularly impressive rider in terms of ability to ride advanced movements (though I haven’t entirely given up that goal), but I am stronger on the trust end of things. Since my treasure of a gelding has some respiratory issues, I am vigilant about watching him for signs of tiring, and about knowing which days I can ask him for a little more (i. e., when he will get beyond his initial coughing) and when walking (or less than that) is all he can do. Before the respiratory issue came to the fore, and before we moved to CA, where we live now, he was a big spooker, and for years I resisted all suggestions that I punish him for that, or let someone else “fix” him for me. I finally figured out that the spooking had a lot to do with over-sensitized skin due to allergies. The spooks always seemed to surprise him as much as anyone, and they never had any element of trying to unseat me. Now, he hasn’t really spooked in several years and his skin issues have also more or less disappeared. I am also very careful about allowing other people to ride any horse of mine. There are a lot of people in the world who are exponentially better riders in many ways, but who don’t know my horses, and whose goals are something other than protecting my horses’ best interests. Anyway, that’s a long-winded way to say I agree with you 100%.

Kip: Shortly subsequent to this, there was a man on the property who offered to do some “classical” in-hand work with Val. He immediately began forcing him to yield away on a circle, and the circle was very small, and the angle of bending was too severe for Val. So he wasn’t doing the exercise successfully and kept trying to straighten himself out. The man got angry and I could tell he was going to hit Val with the dressage whip (mine) he was carrying to force him back into the bending. I’ve never hit Val with a whip! I stepped right in and took Val and the whip back. The man got all offended and told me my horse was being lazy. !!!!! I replied *You* are asking too much!

Tracey: It seems to me that a lot of modern horsemanship can be about asking too much too fast. And there is still that ugly old assumption that if the horse hesitates or is unable to comply with what is being asked, that it is somehow proof of stubbornness, bad nature, etc. For decades now, there has been so much good information available to inform people about the role of pain and fear, not to mention basic misunderstanding in training and handling problems (and of course the best horse people have known this all along). It’s really frustrating that so many of these old approaches just seem to return in slightly altered form.

Kip: Dominance starts in the mind of the human. It’s like a monkey brain thing…humans automatically dominate. And since horses are by their nature so generous and cooperative, it is the challenge and the blessing to learn the self-control, tact and compassion that is necessary to become a real horseman. And any lessons you learn in this odyssey will just help you in all your other relationships.

Tracey: What you say here is so important. Our interactions with horses — assuming that we really seek to be honest and fair, and really look for genuine answers rather than quick fixes — make all the difference in the world for other relationships, too. I’ve long found it profound and appropriate that the one really just and decent society in Swift’s Gulliver’s Travels was the society of horses. (It’s decades since I read it, but that detail remains with me). I’ve always been drawn to sensitive, reactive, anxious horses, too. The horses I love most are the ones who would either fight back if someone tried to force them (as I’m fairly certain my Morgan would) or they’d shatter (as my late Arab gelding and my Andalusian mare most likely would). But if you can gain the trust of these horses — and then spend the rest of your life making sure you never abuse that trust — it can feel like living poetry.

Kip: Yes, you are describing the odyssey, indeed.