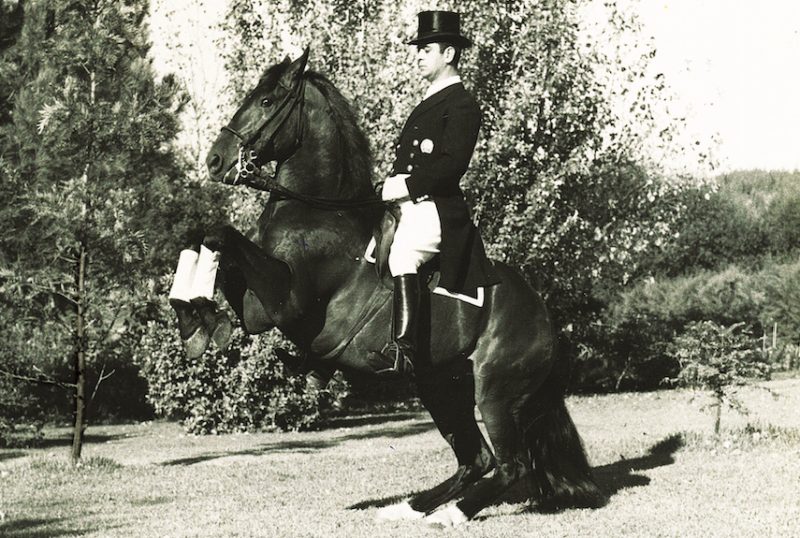 This remarkable book will be of great interest to anyone following the work of Master Nuno Oliveira, its author French écuyer Michel Henriquet, and the subjects of classical training of the highest level and equitation history in general. The appetite of the reader to taste the material is whetted by the preface by Jaime Celestino da Costa, a long time student of Oliveira, who creates fascinating vignettes of the legendary Joachim Gonçalves De Miranda, teacher of Oliveira and da Costa as well. Michel Henriquet introduces himself and his search for high equitation in France, his own teachers and experiences, and recounts his first meeting with Oliveira, it is clear that his life was ultimately changed by this association that lasted 30 years until Oliveira’s death.

The chapters that follow the introduction are a compelling aggregate of letters from Oliveira, interspersed with background to put the letters into context, and diary-like entries recounting training sessions in which Henriquet has watched Oliveira ride which are like mini-training manuals of their own. Through these entries are woven names of great riders who shared the same time and circles.

I have a great fondness for this book; Michel Henriquet and I had a very cordial rapport and I miss that. Also, few of us today get to experience the continuity of training that this chronicle represents and it is witnessing a fascinating journey for the author.

With this book Michel Henriquet created a time capsule containing moments from the apex of the great classical riding of the 20th century. It is a real treasure.

Available wherever fine books are sold.