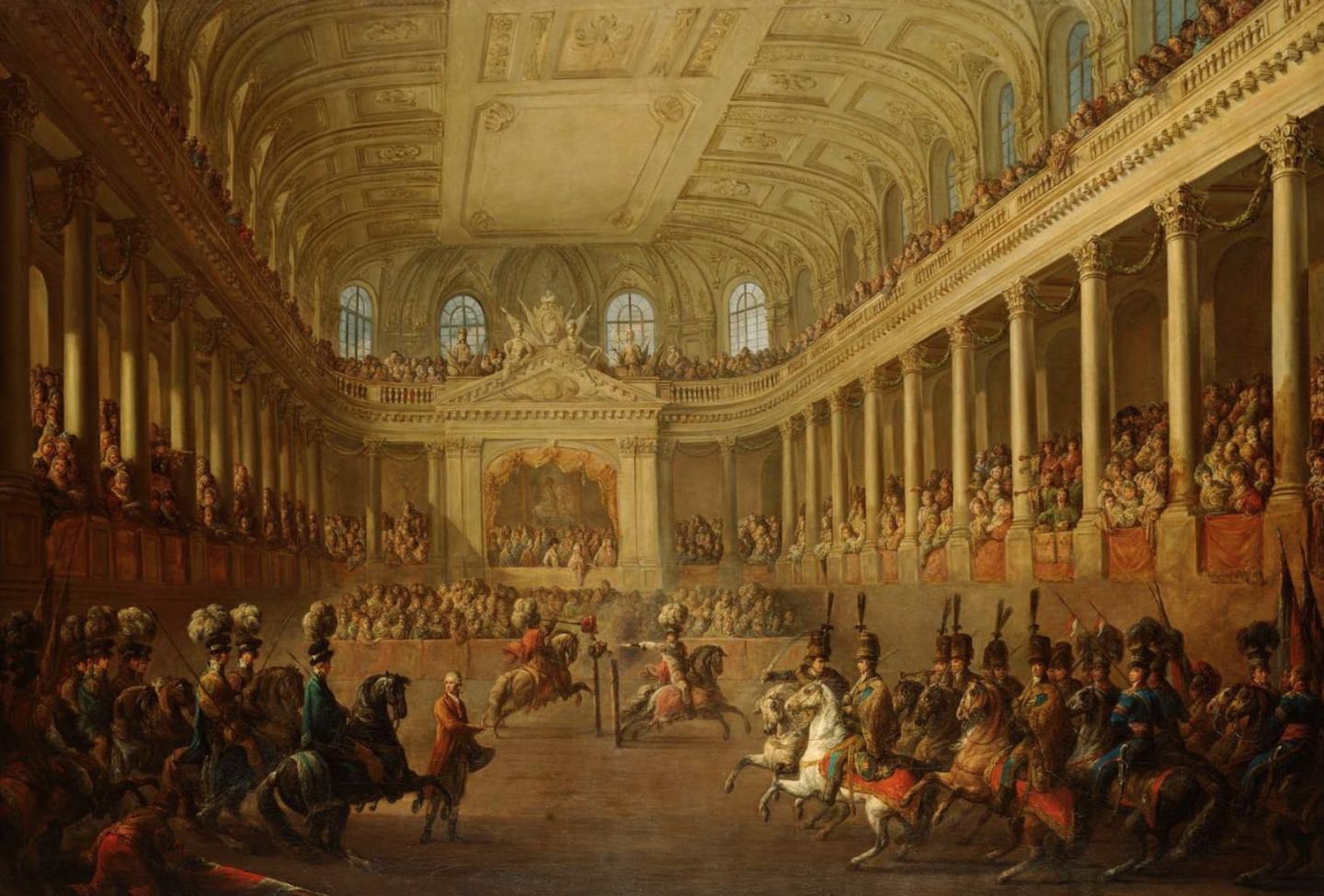 Not one, but an amazing three forewords penned by luminaries of modern classical riding greet the reader who picks up Austrian Art of Riding: Five Centuries”; Karl Mikolka, Charles DeKunffy and Sylvia Loch all give their stamps of approval for the publication of this English translation of Dr. Werner Poscharnigg’s fascinating work.

Fanciers of the Lipizzan horse, the Spanish Riding School, classical riding, fine horsemanship and equestrian history will be thrilled to sit down with this behind-the-scenes look at a cavalcade of famous personalities—both human and horse—who had a critical influence on the development of Austro-Hungarian equitation. “The Courbette” by Ludwig Koch.

Author Poscharnigg begins by quoting Sigmund von Josipovich (1928) as describing the distinctive qualities of the Austro-Hungarian equestrian; “Typical of the Austro-Hungarian equestrian style was always the horse’s swinging, elastic gait and the rider’s pliant, elegant seat in harmony with it. This was the Austro-Hungarian school, envied abroad. This was the school whose art, based purely on mechanism of gait, on correct placing of feet, putting the feel of swing above form, but choosing form individually. Moreover the typical feature of the rider’s seat was not so much the outer conformity that convinced but the implicitness by which each rider could adapt to his horse’s movement, thus encouraging the gait and expressing the uniformity of all Austro-Hungarian riders.”

Poscharnigg traces the cross-pollination of equestrian practices between nations, exploring the long tradition of Austrian equestrian style from its beginnings. “In other countries’ and masters’ equitation, these features may occur more or less, but not in such historic permanence over such a long period of time,” he states, referring to the scope of five centuries of endeavor.

Austria had political and dynastic connections through Spanish-Habsburg royalty, and though there were baroque horses from many countries in the Emperor’s stable and used in the Imperial Riding School, the Spanish horses were considered the best in the world for high school and in the early era the Lipizza Stud bred “original Spaniards.”

Great lords flaunted their stables of spectacular pintos that sported blankets with spots, skewbalds, piebalds, leopards and rare colors such as grullos. The manège stallions were studied carefully to determine their individual characteristics, personalities and temperaments, and were named accordingly. Trained by the most brilliant masters to spectacular levels for which these horses were known and admired within all of Austria, and sometimes beyond, they were considered celebrities and superstars, and treated as living treasures.

As Poscharnigg guides the reader through the pre-baroque and baroque eras, we enter the romantic classical era and begin finding the familiar names and anecdotes of notable trainers, riders, and authors who influenced Austrian equestrian style and practices up to the modern day. These personages include Johann Christoph Von Regenthal (whose most famous student was the beloved court artist Johann Elias Edinger), famed trainer Baron Reis d’Eisenberg, also an artist and author, Adam von Weyrother, Mathäus von Niedermaier, and Alois Podhajsky. Those standouts all speak the same language. They want a free, enthusiastic horse, started with care and love, treated with understanding and fairness, never asked for more than they can do. They demand a thinking rider who always seeks to take their riding to a higher perfection. They demand of themselves inexhaustible patience, and learning control over their bodies so not the slightest movement of their bridle hand can be seen. They admonish hyper-flexion of the neck, regarding the neck as an “adornment” not to be pulled out of its beautiful natural position.

Poscharnigg examines not just the courtly riding of the manège but parallels the sport disciplines and the development of the Austrian cavalry, finally grieving for the loss of the “knightly world view” as the 20th century arrives, bringing two world wars.

Though deeply researched and substantive as an educational resource, this no dry history book. On almost every page you will have the rare opportunity to see black and white and color photographs, illustrations and paintings that are in private archives and will enjoy Poscharnigg’s colorful, playful language. Austrian Art of Riding is not just lively reading, but a rare opportunity to go back in time and get to know those characters you always wanted to meet.