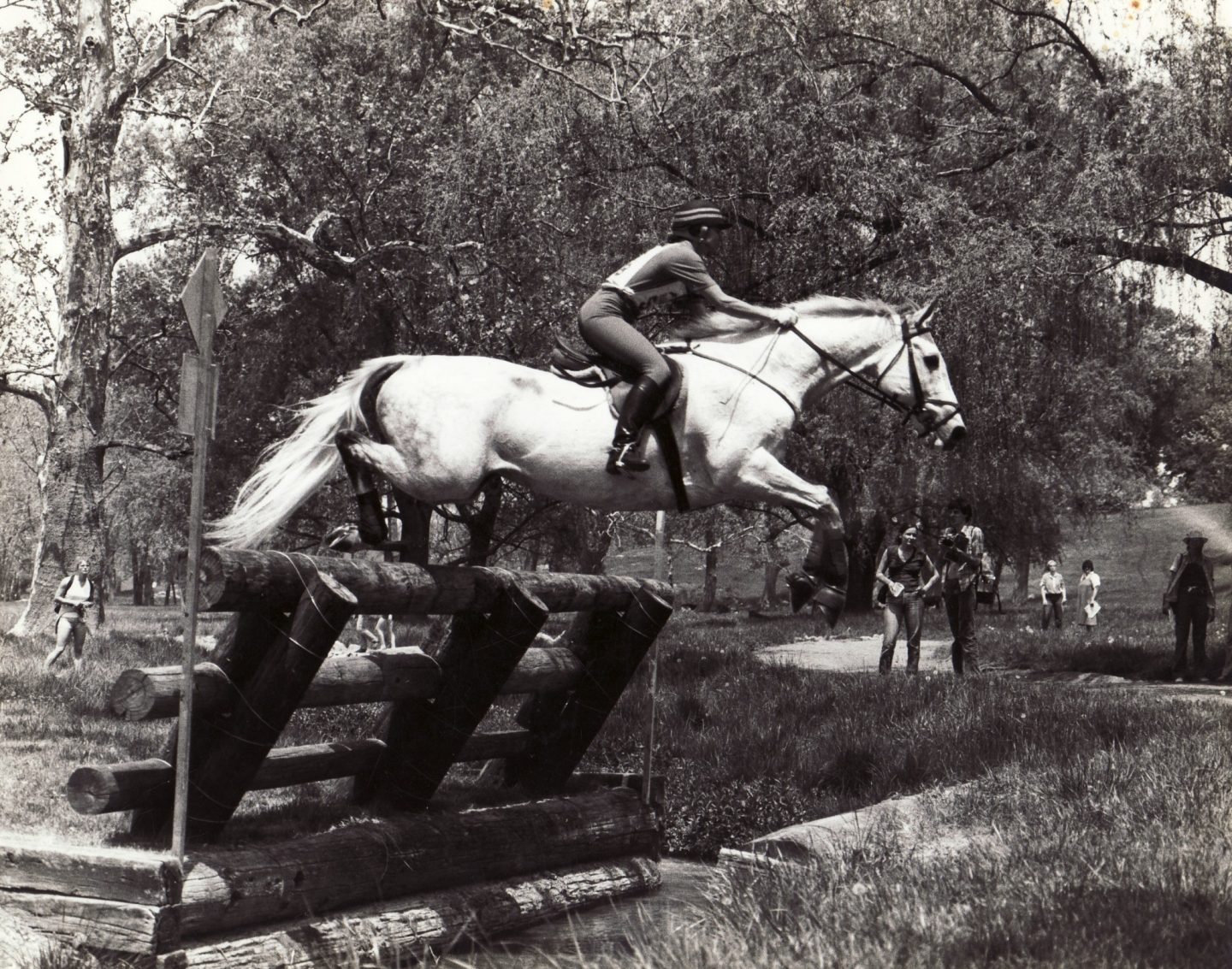 I have always loved this photo. It speaks to something in the heart…that dream all us horse girls have had of the winged white horse who comes to us, invites us to mount, and carries us off through the air to the fulfillment of all our wishes.

The Gray Goose might as well have had wings…I’ve never sat on such immense yet smooth power. His long back made the ride comfortable, and he didn’t have any trouble jumping over pretty much anything that came in his path. When he left out strides, which we both loved to do, it truly was like flying.

But Gray didn’t come and invite me like the dream. Though I instantly felt a soul connection to him when I first saw him as a three year old, he didn’t feel that way about me at all. Nope…when I began riding him two years later at the stable where I rode when we lived in Ireland, I was just one more annoying human who tried to get him to do things he didn’t want to do. And like all the other folks, he simply left me sitting in the dirt behind him as he galloped off, thrilled to be rid of the irritation. Day after day after day.

I’m half Polish, however, and consequently Stubborn is my middle name. In addition to his 1/8 warmblood lineage, Gray was 7/8 Thoroughbred, going back to Man O’ War and Fair Play on his sire’s line, and to the notoriously bad-tempered Bold Ruler on his dam’s side. Understanding that temperament is heritable, I refused to give up. So did he…the change only came when he met my two-year-old daughter, Andrea. Turned out that Gray loved the very young of all species. His armor came right off around her, so I brought her out with me daily. He began to look at me with eyes that were a little less squinty, with ears a bit more forward.

Although everyone else thought he was a bad actor, I understood that he had been started in the typical way, being expected to obey human requests with compliance and become a foxhunter/show jumping machine. The Bold Ruler blood on his dam’s side absolutely required that he be treated with dignity and respect, and the bump between his eyes meant that he was highly opinionated and believed strongly in those opinions. I knew that I would have to approach working with him in a creative fashion and be a detective to figure out the best way to communicate. Above all, I kept reminding myself that everything he did had a reason. Besides, there was no dominating Gray…he wouldn’t tolerate it. And I was far too little and light to make him do anything he didn’t want to do. Instead, I listened to him, and he in return began to listen to me.

Many adventures followed. The one and only thing he actually enjoyed doing with a human on his back was galloping and jumping cross country—lucky me that we shared the same dream! We were both learning the ropes together, and together we had to conquer a whole lot of fear. Me of jumping solid obstacles, him of ditches and water. We took it step by step, day by day. I read a lot, and he suffered my learning curve with equal amounts of vexation and graciousness. I learned as much from him as he did from me. It turned out to be a blessing that we lived in the mountains of Virginia where I couldn’t get regular instruction. I had to find my own way of following what I read in books and articles. Were we unorthodox? Yes. Did our cross country rounds amaze people as we climbed through the ranks? Absolutely.

This photo was taken at the 1981 Blue Ridge Horse Trials in Virginia by Elizabeth Preznikoff. I had previously gone as a spectator to Blue Ridge in 1977 to watch those at the top compete Advanced. I had only competed Novice at that point, and was eight months pregnant with our son, Brian. Nevertheless, I walked the entire course and watched avidly, on fire with the dream of someday doing this course with my erratic yet talented Irish gelding. I learned quite a bit throughout the long day…both how to do things, and how not to do them. What a thrill I felt 4 years later to finally be qualified to run this course!

I walked the cross country course three full times, and I had my plan. It looked like fun, and I couldn’t wait to leave the start box on the glorious bright Spring day. It was a long hack from the stables to the warm up area and start box. Gray and I were both eager, though we walked along quietly on a loose rein. Eventually I began meeting other Advanced competitors returning to the stables after completing the course. I nodded and smiled, but couldn’t help noticing that quite a few of them were splattered in mud…and the course was dry. Finally Mike Plumb came along, and I stopped him to ask what the issue was. He said that the jumps were riding well until the island complex.

That jump had seemed like fun to me when I walked it, and I sat on Gray hoping for further details. A lovely stream meanders through this beautiful farm, and the course builder used it to good advantage. The Elephant Trap, captured in this photo, crossed it, and later we crossed it again: down a bank into a wider portion of the stream, up a slope onto a small natural island to a vertical made of slender tree trunks, then off the island, back into the stream and out. All very natural, and approached with rhythm and balance, it should have flowed nicely. Mike acknowledged this, “But”, he said, “The horses are carrying the water out of the stream with them as they come up the slope, and being clay it’s become very slippery. The falls are happening as the horse takes off over the fence.” He wished me luck as he and his horse took their muddy selves back to the barn.

Yikes! As Gray and I continued along the path, my mind frantically chewed on this information. I reviewed the jump over and over in my mind, trying to think of a different way to jump it, but there was really only one approach. After moments of inner turmoil, I calmed. I was riding a very athletic horse with a strong sense of self-preservation and cat-like reflexes. Although he’d only had a few times out foxhunting in Ireland (due to being uncontrollable), those experiences had taught him to cope with the unexpected. All I could do at this point was trust…trust him, trust our bond, trust that my original plan was still the best and attack that complex going forward.

All too soon we were in the start box with the countdown, and then experiencing the thrill of galloping in partnership on a horse who loved this sport as much as I. We flowed over the fences, jumping the Elephant Trap at an angle exactly according to plan. Approaching the Island Complex, I could see the crowd that had gathered, and the glint of sunlight from the soaked mud on the slope where we had to take off over the fence. I had explained the problem to Gray, and as we came in sight and he saw the flags and locked on, I told him this was the one. I sat down, wrapped my legs firmly around his sides, looked over the fence, grabbed a big fistful of mane…and what happened to the other horses also happened to Gray. He galloped the stride through the water, up onto the slope, and slipped on takeoff. His forelegs hit the top of the jump, and for a heartbeat, we were sideways over the top of the fence, me clinging like a monkey before his extraordinary reflexes took over. Somehow, he managed to right himself before his front feet touched down and we continued on, splashing through the other side of the creek and out. Whoo Hooo!

If it had been current times, I would have done a fist pump. As it was, I told Gray out loud what a marvel and hero he was to me, and inside I said a brief prayer of thanks. We went on to ace the rest of the course, and I led my amazing horse the long way back to the barn flying nearly as high as we did while out on the cross country. All these years later I still feel the glory from that run.

Through the years of building our bond and discovering our strengths and abilities together daily, Gray did indeed carry me to the fulfillment of my dreams of traveling the world as a member of the US Three Day Event Team. Along the way we placed in the top 10 every time we competed at Rolex, winning it in 1982, and went to two World Championships, bringing home the bronze Individual and Team medals from Germany in 1982. We were also alternates for the 1984 Olympics, and chosen to double for Melissa Gilbert and Sylvester in the movie of that name.

But his greatest gift to me, shining forever fresh in my heart, was the transformation of our mutual fear into trust through the love and respect we held for one another.

(Kim Walnes was on the US Eventing Team coached by Jack Le Goff from 1980-1986. Hers is a story straight from the fairy tales, since, as a housewife with small children, she found a highly unlikely horse in Ireland and rode and trained him herself to place 2nd at the first Event held at the KY Horse Park after the World Championships four years later. This led to her being invited to a USET Team Training Session, and rest, as they say, is history. Gray went on to be called “The best Event horse in world”, and still has an international fan base. In 2012 he was inducted into the Eventing Hall of Fame. Kim broke the mold by competing as a mother, seeking help from classically trained professionals outside the field of Eventing, and using her intuition to work with difficult horses. These days she teaches, trains, and coaches from Pennsylvania, and travels to do clinics internationally. She is known for her compassion for both rider and horse, and for her ability to impart “feel” to riders and handlers.)

For more information about Kim, see: