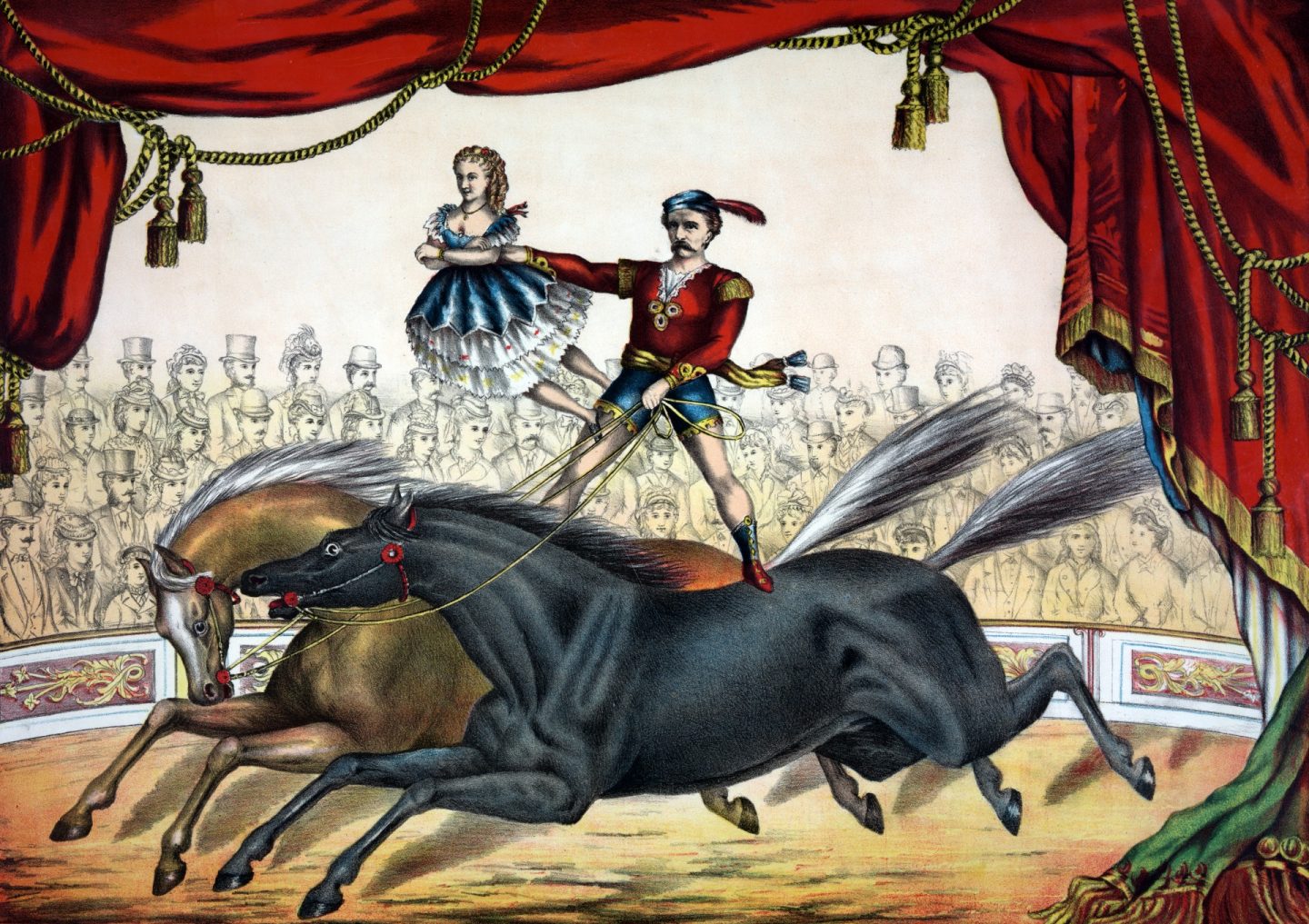 I had to laugh when I wanted a feature image for this post and this amusing Victorian circus act image that I saved some time ago floated up to the top of my extensive gallery of artwork.

Everything about this image is fascinating. The audience as a group oddly seems to be either looking in front of the “two horse act” or behind it. Yet each person’s individualistic face and his or her details from headwear to clothing is drawn carefully. The mustachioed rider understandably has a preoccupied expression, balanced atop two horses as he is, guiding them (on loose reins, I might add!) as they run at frenetic speed in a small ring, and at the same time holding out a perky lass with golden ringlets who stands with her right foot on his manly thigh…with her left ankle extended out of sight.

The question “Do you know where your right leg is?” was actually asked me by my friend Sylvia Loch’s assistant trainer in a lesson at Sylvia’s estate in Scotland many years ago. She had me riding her own lanky chestnut thoroughbred who I found hard to ride, being not very sensitive, needing a lot of pushing and the use of far heavier aids than I was used to, riding my own light little Andalusian. I brought the lumbering gelding to a stop to think. I looked in the sky, at the ground and finally at my right leg for answers. I wasn’t any more aware of where it was than any other particular part of my body. “No, I guess I don’t,” I answered her, rather mystified. “That’s what I thought,” she said archly.

I didn’t think much more about it until about eight years later when I found a very talented—though sometimes grumpy—instructor in Tucson who had a real understanding of horse and rider biomechanics. Val and I rode at least one lesson a week with her for a year and I thought we were making real progress, when one day the instructor thought up something new to drill me on. “Why is your right leg so grippy?!” she accused me. I stopped Val and glared at her. “It’s not grippy.” “Yes it is. Why?” “It’s no more grippy than my left leg.” “Yes it is. Your left leg is nice and draped but your right leg is grippy.” “It isn’t.” “It is.” “Well, I’ll just go see someone about it.” “Fine.”

Within the next week I found a performance movement specialist who also did physical rehabilitation for athletes. “My riding instructor tells me my left leg is fine but my right leg is grippy. Can you tell me why?” She also owned horses so she understood the biomechanics of riding. “Well, your left psoas muscle is long and loopy and your right psoas muscle is tight and bunchy.” “Hmmm. Would you say my pelvis is asymmetrical then?” “Oh yes, it is rather badly, more like a parallelogram than a rectangle. Your right side is rotated forward somewhat compared to your left, though no human is perfectly symmetrical just as no horse is perfectly symmetrical. Do you have any thoughts about how you could have been injured that would cause this?”

“Hmmm. Well, it could be the time my horse launched me to the moon at the age of 14 and when I came down so hard that I tore my brassiere in half and shredded my shoulder after skidding in the gravel a couple of feet, I also herniated a lumbar disc and caused seven or eight others to bulge. I tied a knot in my bra and got back on my horse; I was now late to meet my riding buddy. Or it could have been the forceps delivery of my too-large baby which wrecked my pelvic ligaments. Or, very probably, the time in Ireland that the drunk groom gave me such a forceful leg up to the 17 1/2 hand Irish Sport Horse that he hurled me over the top of the horse and I never even touched saddle leather before I landed in the parking lot on my right side, fracturing my pelvis. But I didn’t know that for sure and so even in pretty terrible pain I rode 120 miles through County Sligo in six days and didn’t go to the doctor until I got back to the U.S. a couple of weeks later.”

She blanched and said “You really have to take better care of yourself…you’ve been hurt seriously.” I laughed and said, “And that’s not even counting the seven concussions. Is there anything that can be done in my situation?” “Well, we’ll try some different modalities of physical therapy and see how far we can get.”

I was elated in a way, because although I was also a bit depressed, suddenly I understood there was a good reason why my right leg was grippy, and also why there was always a darker area in the dirt and sweat on the underside of the white schooling pad I always used…right under where my left seatbone was located in the saddle seat. If my left leg had more drape it probably also had a little more length than the right leg, and if the right side of the pelvis was rotated forward and my right leg with its bunched up psoas was probably also advanced compared to my left. I felt bad that I subjected Val to the imbalance.

The next lesson I explained all this to my instructor. “And that’s why my right leg seems grippy,” I concluded cheerfully. “I don’t care,” she sneered, “It’s still grippy.”

I really worked at trying to put myself together. I went to physical therapy, I joined a gym and worked with a trainer there, I had massages. I got stronger and the ever-present discomfort in my back decreased tremendously. “It’s better,” grudgingly admitted my instructor.

Do you know where your right leg is?