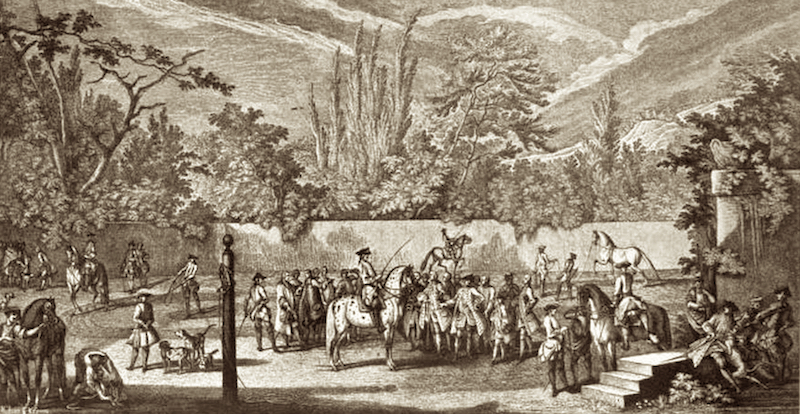 In his time the manège, i.e., the training and riding of the great horse, as the war horse was called, and the “stirer,” or pleasure horse, was still considered one of the essentials of a gentleman’s education. A remnant of this train ing of horses may still sometimes be seen at the circus or the hippodrome, but the staid courtesy, “comeliness,” and “decency,” indispensable to the riding school of the ancient régime, have disappeared from our midst, whether for good or for bad.

From the time of Elizabeth to the period represented by our illustrations, this art, and the training of horses for the haute école, was the subject of endless books, pamphlets, and prints. One of the earlier and most quaint works of this kind was penned by one Maister Blundevill in 1597. He laments the lack of knowledge that the Englishmen have had, “and especially have at this present, as is best seen at a muster when the Queenes Maiesty hath need of horses and horsemen, where oftentimes ye shall see some that sit on their horses like wind-shaken reeds, handling their hands and legs like weavers, or if the horseman be good, then the horse for his part shall be so broken, as when he is spurred to go forward he will go backward, and when his rider will have him turne on the right he will turne clean contrarie, and when he should stop he will arm him selfe and run awaie, or else stop sooner than his rider would have him, or use suchlike toys.”

“First,” says Maister Blundevill, “I found that to horse of service belong these chief points here following: That is to saie, to trot cleane, and lustilie, to stop lightlie, to turne on both hands readille, to gallop stronglie, to manege with single turne surelie, and, last of all, to passe a cariere swiftlie. And in all his doings, from the beginning to the ending, to reine well and to beare his head steddilie. All which things are also common to the ‘stirer’, but it is requisite to the stirer besides all this to learne to bound aloft with al four, and to yarke withall, to gallop the gallop gaillard, to fetch the capriole, to do the corvetti, and such like kinds of saltes.” Which shows us that although Maister Blundevill was British, he was not so insular as to object to adopting the Italian Grison’s nomenclature, as well as his instructions of how horses were to be taught the various tricks of the manège. Indeed, in the French, German, as well as the English riding schools, the Spanish and Italian terms prevailed, as the latter countries were the home of fancy horsemanship.

By reading the book of Blundevill and Grison we gain a very fair notion of what is going on in our illustrations. ELEMENTARY LESSONS FOR HORSE AND RIDER.

In the first picture we have the elementary lessons for a young horse and young rider. The horse we see in the left-hand corner of the foreground is being led in blinkers till he gets accustomed to the sights of the school. In the background on the right we see one of the young ones being lunged. In the right-hand corner is the mounting-block, and the rider is learning to mount; in the centre he is seated in the correct position upright, his stirrups “neither too long nor too short, his elbows close in to his sides, his reins in his left hand close to the pommel of the saddle, and his ‘rodde’ borne low by the rider’s thighe, but not upon his thighe, with the point upward, and before you come to the place of turning you may let it fall to the right side of his (the horse’s) head.” This is all being explained to the rider and bystanders by the riding master standing in the centre group of the picture. In the background a man is trotting his horse along a wall, considered an excellent manner of teaching a horse to keep a straight line, or, as our ancient authors say, to keep a “forthright path.”

A closer examination of the pictures will show us that many of the horses are not being ridden with a bit only, but besides the lunging rope there was a nose-piece to the bridle, known as the cavezan, caveson or cavezone, musrole or headstrain, a bridle with a strong hempen cord covered with leather across the horse’s nose. In England the cavezan was usually a chain, and sometimes was furnished with teeth, which must have been a cruel instrument even in the lightest of hands. When the horse was first taught all his pacings up to the cariere, we are told that it was done with the French martingale and musrole, but when the horse is “perfit and reddie in all the lessons, then lay away the cavezan, and instead thereof ride him with a smooth cannon (bit) and a flying trench.” LEARNING TO PACE AND TROT.

In the second illustration, on the left-hand side, a horse is tied between two pillars, and a man beats a drum close to him, while another caresses the horse with hand and whip to quiet him. On the mounting-block near by sits a man with a flag which will presently be unfurled and flourished in the horse’s face, so that he may get accustomed to the drum and waving banners on parade or on the field of battle. The first lesson of the school was to teach a horse first to pace, then to trot, then to gallop round the ring, first taking, as Blundevill says, “two tornes to the right and then two tornes to the left,” so that they might be handy turning on both hands. In the background a horse is being taught to back, “which will not onely staie his mouth, and make him light of head, but also to lift his legs and to be the more apt to advance before.” HORSES LEARNING THE HALF TURN AND DOUBLE TURN.

The third picture shows us a school, in the centre of which horses are being trained “to turne readily on both hands.” There were “half turnes, whole turnes, and double turnes; the half turne is when a horse turneth on the one side, setting his head that way where his taile before stood, but if he doubleth the same and setteth his head that waie it stood at first, then it is called a whole turne, and two such turnes do make a double turne.” We see two horses being taught to go sidelong, one with his hind quarters against a pillar, and the other with his head towards the pillar, and thus turning round it. In the background against the wall is another horse being taught to go “sidelong both with his foreparts and hinder parts in equal motions,” as it was “of great use in the warres, and of so much delight in the place of pleasure.” The rider on the right near the wall in this picture is doing the terra terra, which one author describes as “how to train your horse to turn upon the ground.” This especial feat was that the horse turned on his haunches, only lifting his fore feet a little above the ground, and not with a bound in the air, which was a trick they were also taught, and was called “turning aloft.” DOING THE CAPRIOLE AND BALLOTADE.

In the fifth picture the performances are more advanced. We have the pesate, or, as Blundevill calls it, “the advancing before,” when “the horse at the stop lifteth up both his fore feet even together, and somewhat above the ground, and letteth them fall again twice or thrice together.” Then came the lesson to teach the horse to yarke behind, i.e., “to gather up his rumpe and cast out both his heels even togithere,” which action, combined with the pesate, became the capriole, or “goat’s leap.” In the last picture a great noise is being made by the men in the right-hand corner. They are drumming, waving a banner, and letting off “harquebusses” to accustom the horses to the din. One horseman in the background has reined in his horse and is standing at parade, having finished showing his horse’s feats, and along the wall behind him a horse is passing his cariere. The cariere was a short course of some four score and ten paces, along which a horse galloped at full speed, stopped, did the pesate or turned terra terra, or with a single turn, and again galloped or passed the cariere, being forced “to run so swiftlie and so roundlie as he possibly can, even to the ende to the intent that he may stop on his buttocks.” And for a proper finish to every feat of horsemanship our good Master says: “If upon every stop and conclusion (as the last of all labour) you make your horse bound and yarke out withall, it is most comely.”