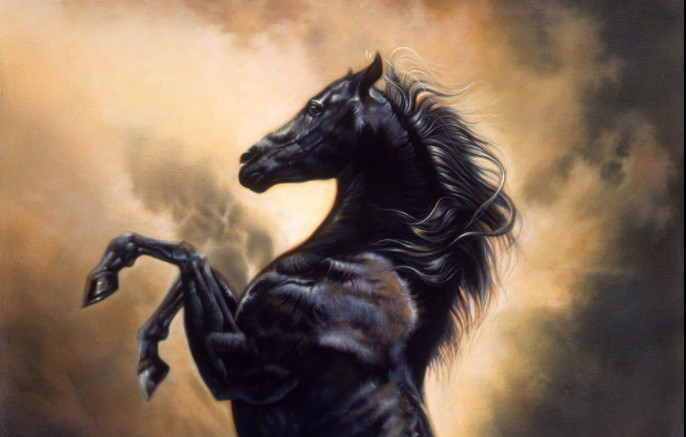 (Poem by Virgil Suárez, Professor Florida State University, Tallahassee, Florida. Image detail from painting that may be by John Rowe.)

It was raven black, of shiny mane, and the people
said the floods brought him in, burst
through the heavy aspen doors like a cloud
of rubber tire black smoke, into the church
on the hill, kicking over the pews, froth in its mouth,

like the anger of a thousand years, as it paced up
and down the aisles, some demon-like sentinel,
whatever got in its path, it muzzled over, like the votive
candle holders, the flower pedestals, even the frail
confessionals. The priest called the sheriff, and soon all

had been spooked by the seven days of bad weather,
thunder and lightning lunacy. Some claimed
it was possessed and in the shadows its eyes shone
like red-hot charcoals, the devil’s rubies.
The sheriff called the veterinarian who came ready

to shoot the animal with a tranquilizing dart,
and was about to do it when the horse’s owner,
a boy of no more than thirteen named Chema
(Spanish for Jose Maria) ran up the steps,
entered the church where everything was still damp

from the rain and the holes on the wind-blown
shingled roof — there was even a few inches
of water pooled in the church where the bibles floated
like oak leaves — and he called his horse by its name
“Fiera!” which means fierce in Spanish, then he climbed

on top of the horse by pushing himself up from a knocked-
down altar chair, then the animal surrendered
to the boy’s petting, how his fingers combed through the hair,
then the boy and horse galloped out of the church,
in front of hundreds of people, like a cloud of white smoke,