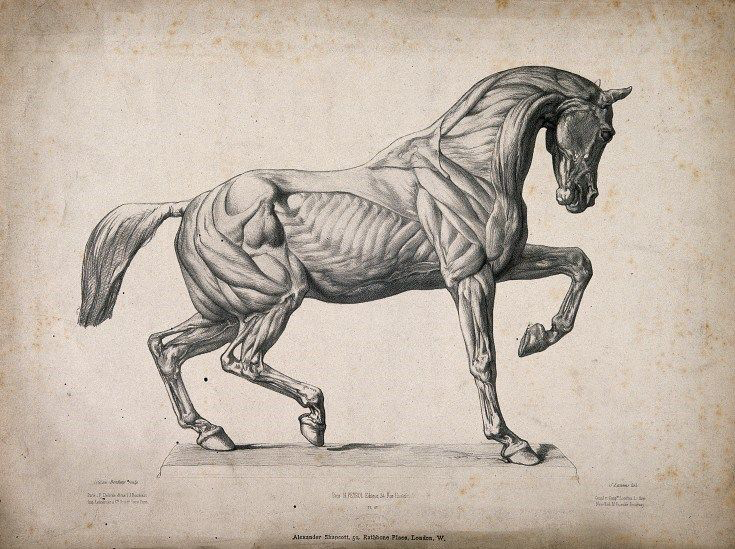 A reader of this column writes: “How come you have never mentioned horses that have one-sided mouths, horses that just won’t take an even feel of the bit on both reins? They give easily to the rein on one side, but stiffly resist the opposite rein. They move forward with their necks more or less curved to one side, always the same side, and their heads slightly tilted so that their ears are not on the same level. What makes a horse move this way? What can be done to correct such a horse, beyond riding with the reins completely slack?”

Of all the training problems I am asked to solve, this matter of the one-sided horse is probably the most common. I have been hearing about it from experienced riders as well as novice trainers, for at least 50 years. I have met with it to various degrees in almost all horses. Therefore I would take issue with the statement that I ‘have never mentioned’ it. It is a problem we all must solve in putting a horse on the bit, a subject I have discussed more than once. Perhaps it would be true to say that I have not given the bedeviling problem the emphasis it merits.

If you have a horse that is reluctant to take a certain lead, you have a one-sided horse. Moving ahead in a straight line, he may not show a hollow neck or a tilted head, but to a somewhat lesser degree you have the same problem as with a horse that does show these signs. Whether we think in terms of the mouth or refusal to take a certain lead, the problem is the same; the horse is muscularly stiffer on one side. That’s why he does not travel straight or favors the lead on which he is more comfortable. Such expressions as one-sided mouth, hollow neck and having a favorite lead may be convenient to use, but they can be misleading. They fool us into confusing effect with cause. Then we waste time attacking the effects instead of rooting out the cause.

On this matter of one-sidedness we must learn to think of the whole horse. A horse not supple throughout its whole body from poll to hocks can never have a truly excellent mouth or work as well to one side, the stiff side, as the opposite side. Any stiffness in front of, under or behind the rider will show itself in the mouth. That is why in schooling we put our horses through graduated suppling exercises, beginning with the simplest. As a green horse’s muscles become stronger and more supple, each movement comes easier to him. As he progresses step by step to more difficult exercises, with every improvement he becomes more lightly responsive to the reins. The increased suppleness shows first in the mouth.

Reverting to the question why are almost all horses naturally more supple on one side than the other and what makes them that way, I do not believe that anyone can answer with certainty. I have never heard of an explanation that completely satisfied me. Some authorities theorize that most horses are naturally ‘bent’ to the left because the unborn foal usually lies in the womb with its head turned toward the left shoulder. But what about those horses that favor the right side? What about the very few that seem to be equally supple on both sides? How did they lie in the womb?

This prenatal theory does not satisfy me because I see no relationship to a concomitant puzzle that applies to us humans; why are we invariably one-sided? Why are most of us right-handed and right-footed while lefties, the ‘southpaws’, among us are a minority? An even smaller minority are those people who are naturally ambidextrous, able to use either hand or leg equally well without special training. They are few. Why do persons accustomed to handling firearms always discover that they have a ‘master eye’?

Watch a horse you know to be one-sided galloping free in a pasture. When starting off straight ahead he will take his favorite lead as a matter of habit, but if he must or wants to turn toward his ‘stiff’ side he will have no difficulty doing so. Colts romping in a field perform flying changes easily and smoothly. I take this as positive proof of what I have observed many times: horses become confirmedly one-sided chiefly as a result of how they are ridden. Inept riders make more one-sided horses than nature does.

Col. Alois Podhajsky, discussing the one-sided mouth, states that a horse ‘will make himself stiff on one side.’ Podhajsky was a stickler for exactness and I don’t think it was by chance that he used this precise phrasing, implying that the horse stiffens himself in reaction to the rider. If even experienced high school riders get this effect, imagine what the rest of us lesser mortals do when we start ‘reining’ a horse.

I believe that if we realized what we often do to make our horses crooked, adding to their alleged one-sidedness, we would not handle colts as we customarily do from the time they are foaled. Unknowingly, we aggravate whatever tendency toward crookedness they may have. Probably the commonest example of this, and certainly one of the most damaging, is our practice of handling horses almost exclusively from the left side. We lead from the left, mount from the left, and more often than not pull a horse to the left when turning him around instead of pushing him to the right. This way is so firmly entrenched in our style of handling that we customarily speak of the ‘near’ side and the ‘off’ side. How did this custom arise? Because once upon a time the horse was an instrument of warfare and warriors wore swords (on the left side because most of them were right-handed). We don’t wear swords now, but still do most handling from the left side; the near side is still the only ‘correct’ side for mounting and dismounting.

As a natural consequence of being handled this way almost all the time, a colt quickly learns to yield to a pull from the left side, while we seldom ask him to bend the opposite way. Thus, we develop and supple the young horse’s muscles lopsidedly from the start, besides instilling in him a left-side mentality. A quick way to tell which side an unbacked colt favors is work him on a longe line. He will trot and lope willingly to the side he likes and be bent on the circle, slightly facing to the inside. But when you turn him around and work him in the opposite direction he won’t bend at all; he may even carry his head slightly turned toward the wall. You may have to be alert that he does not stop sharply and try to swap directions to get back on his favored side. The persistance of some horses in doing this is sometimes amazing.

Consistent daily longeing, with the horse firmly enclosed between the line and the whip, is most helpful in breaking down this one-sidedness only if the work is done at a trot and canter, mostly the canter. Work at the walk for this purpose is pretty much a waste of time. Obviously, the trainer must handle the line with a give and take action, never with a steady pull. [Which encourages the horse to just brace against the line. K.M.]

It always helps to subtly widen and narrow the diameter of the circle, forcing the horse to readjust his balance and forget about resisting. A horse’s mind is not made to think of two things at the same time. With a horse extremely one-sided, for this work I prefer a rawhide hackamore rather than a longeing cavesson. Don’t waste time trying to do it in a halter. [When he specifies “longeing cavesson”, I believe JTY is referring to the padded nosepiece found on the typical longeing cavesson, which makes it comfortable for the horse to lean on it. The stiff rawhide hackamore will discourage the horse from leaning his sensitive nose into it and resist the handler’s invitation to stretch his stiff side and bend into the circle. The halter will slide around toward the outside of the circle and lose position. K.M.]

Ground driving is an even better corrective method than longeing. The driving lines should be long enough to permit a radius of at least 20 feet. The inside line should lead directly from the horse’s head to the trainer’s hand. The outside rein that wraps around the hindquarters may be threaded through a stirrup or a low ring on the surcingle. The trainer should position himself near the center of the ring, as when longeing, and he should move as little as possible; ideally, he should remain standing in one spot, merely pivoting to keep facing the horse. The factor of vital importance is that he should have a firm but light, active feel on the inside rein so he can set up little vibrations with light pulls and slacks so that the horse has no steady resistance to pull against. It’s OK if the outside line remains slightly slack, but a very light contact is better.

When mounted schooling begins many young trainers make a common mistake. They let the rein on the hollow side of the neck hang slack and try to hold the horse straight with tension on the opposite rein, on the stiff side. This never works. It takes two to pull and the rider is giving the horse something firm to pull against. The way to get results is to take a light, firm, steady contact through the rein on the hollow side, compelling the horse to accept the bit on that side; then with repeated half-halts on the other rein break down the stiffness on that side.

The rider must maintain this contact on the hollow side while repeatedly applying half-halts through the opposite rein. He must keep the horse moving forward at a brisk working trot until the animal accepts the bit evenly and goes forward willingly.

For this work a trainer needs infinite patience, persistence and tact. One of the most tactful horsemen I’ve ever known had his own way of suppling stiff horses. He would have an assistant, holding a carrot or a bit of an apple, stand beside the horse. The mounted trainer would gently feel the rein on the side he wanted the horse to bend. The assistant would offer the tidbit so that the horse had to turn his head and reach for it. Gradually the degree of bending and stretching was increased.

“It never fails,” my friend assured me. “In no time I’d have them stretching their necks to the limit, taking the carrot right off my knee.”

“In no time?” I sounded skeptical. “How many carrots did you need?” He chuckled. “Some of the hard cases ate about a bushel. But you bet they limbered up.”

Many thanks to Yvonne Welz, publisher of “The Horse’s Hoof” website, for providing access to her archives of John Richard Young articles. For more information about Yvonne’s work see http://thehorseshoof.com.