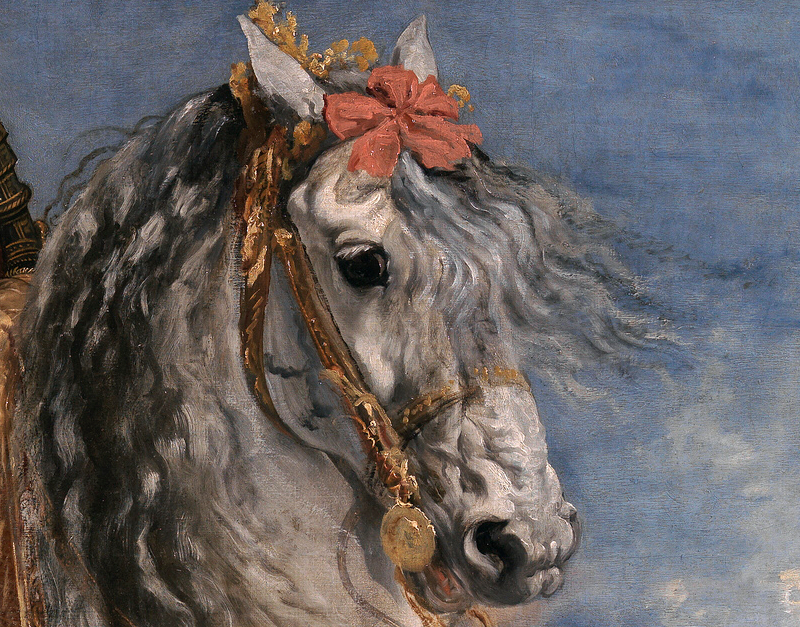 For centuries the epic history of man has been the stuff of his dreams. When we asked the impossible of him, he never knew the dull, bitter thud of defeat. Half-dead from the heat, he buried his hooves deep in the sand of a thousand deserts. Half-dead of cold, in the razor-sharpness of the storm, he crossed the snows as the lightning sang around him. On his back the men of Spain reached the ends of the Earth, uniting nations and bringing to them, through dead calms and blustering hurricanes, the sacred sign of the Cross.

His forelegs, like hammers beating the barren belly of Mother Earth, scrambled across stone and trampled the hard-baked clay to open the doors of many continents, and his hooves raised sparks which lit unknown paths, transforming them into highways of glory.

Do you remember? His ears danced on those sultry August nights, while the heavens wept stars and your guitar was your only weapon against loneliness.

Look at him as he grazes grass and flowers on the wild carpet of a vibrant Andalusian spring, the heart of the countryside beats in his mouth and the breeze ruffles his mane like a sigh from God.

Your soul sinks deep into his eyes, eyes weary from the leagues they have travelled, eyes whose retinas bear imprinted the images of fighting bulls who know no forgiveness, of the downtrodden backs of conquered empires, of the rhythmic swaying of a dark girl’s hips…

Take delight in his muzzle, as it trembles like the first leaf or like a woman’s lips after that first kiss, awakening at dawn the crystalline stillness of a pool and bringing cheer in the evening to the blue sobbing of the streams.

Discover the freedom which is forever born in his flanks and know for yourself the miracle which can transform him in an instant from whirlwind to calm, from calm to a whirlwind…

Lucky indeed the man who mounts his back as if it were a throne, to know Heaven without leaving the Earth, to share with him, over the years, the dreams and paths of life, and to watch this passion grow in his children and in his children’s children, in a never-ending story of friendship.