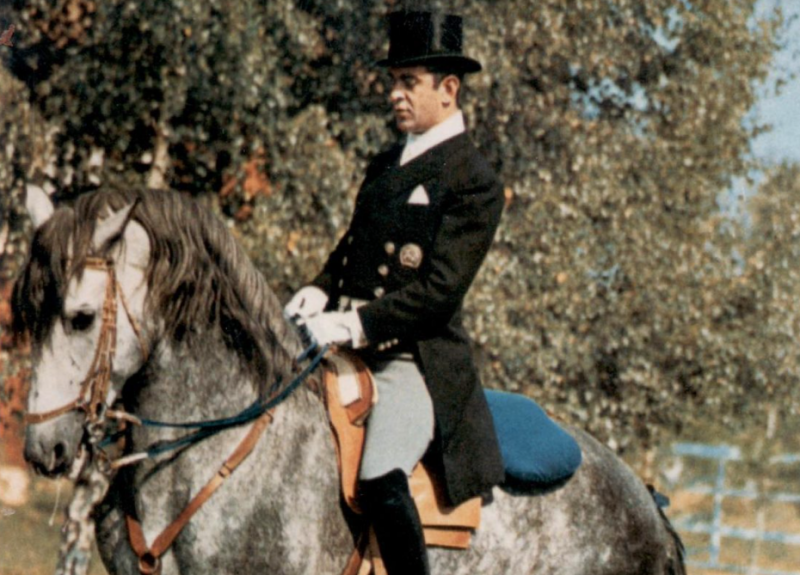 [“Oliveira Shows His Art of Riding,” by Elizabeth Polling, Horse and Hound, November 1987.]

SEVEN HUNDRED enthusiasts drawn from all walks of the equestrian world gave a standing ovation to Nuno Oliveira following a day of equestrian artistry at New Hall Riding Centre near Chelmsford, Essex.

This unforgettable occasion was arranged by the Association of British Riding Schools, whose members had the pleasure of visiting Oliveira at his home in Portugal  last year. They were honoured when he accepted an invitation to come to England after a gap of 21 years to give an insight into his methods of training horse and rider. For this opportunity to see the maestro at work, the ABRS opened its doors to non-members and the response was overwhelming, with societies nominating horses and riders to take part, from which six of varying type and standard of training were finally selected by a panel.

These were: Ultimado II, an Andalusian stallion (Christine Davies); As If By Magic, an Irish Draft/TB gelding (Sabrina Benson); Montmor-O-Novo, a Lusitano stallion (Nan Thurman); Boy’s Own, an Irish TB gelding (Tina Layton); and Big A, a Swedish TB stallion (John Lassetter).

First into the arena was Ultimado II, understandably initially a little unsettled in the strange surroundings. Here we learnt the first maxim, that of keeping the horse in walk until he relaxed.

The advice was: “Spend the most time in the lesson at walk, it gives the horse time to think. People forget to work at walk.”

Not until the horse relaxed and produced a collected walk on a circle was he asked to proceed to other paces.

In all the movements that followed, the riders were reminded;

“Go by your leg. Go by your back. Go by your seat. Go by your head…but not by your spurs. The horse is your companion, not your slave.” This last is one of the fundamentals of the philosophy.

Again and again the need was stressed to achieve cadence by proceeding slowly with power, a principle ably demonstrated by Oliveira’s pupil, Lucy Jackson, who has been training with him in Portugal nearly two years, having been with Sylvia Stanier here.

Lucy rode each of the horses under guidance, illustrating Oliveira’s principles     so logical and yet so rare–“if you first make your horse calm with the same position, with the same power and happy with soft reins, the rest is easy.”

The equestrian lightness for which Oliveira is renowned was apparent in all the work at every level and was much in contrast to that often seen.

“Take your reins like a flower, not like a stone,” he told one rider before commencing the rein-back. “Take your horse by your waist and by your seat, not by your hand and never by force. If you do it by force, it is not the art of riding, it is something else.”

When introducing piaffe, he emphasized the need to prepare for the movement and urged the riders not to go on too long. “Stop one or two steps before your horse likes to stop,” he said.

The need to prepare for each movement was a recurrent theme.

Of particular interest was the handling of the four-year-old gelding, Boy’s Own. Here Oliveira distinguished between power and speed, instructing his assistant to ride the horse slowly with longer reins, creating impulsion by applying “electric soft touches” with otherwise still legs (no spurs), while giving with the hands when the horse gave, but not allowing him to put weight in either rein.

The results in terms of lightness, carriage and impulsion were, to say the least, impressive.

Last of the pupils was John Lassetter, riding his stallion Big A. In assisting this rider to obtain piaffe Oliveira advised, as he had done in so many of the movements during the day, more preparation.

“You are impatient and young,” he told this rider. “Take more time, like old men.”  He commended Lassetter on his brilliant work, concluding “you are a fine rider.”

Whilst advocating lightness of touch and stillness in riding, Oliveira in no way advised disregarding discipline. In fact he finished by saying “let the discipline of the Germans and the lightness of the French be the style of the English.”

In one of his writings Oliveira says “Although outdated by the mechanical age he [the horse] still serves to lend companionship to many people and adds a touch of lustre in our otherwise shoddy lives…”. Many present went home inspired by the day’s proceedings to improve that touch of lustre.

Published with permission of Horse and Hound magazine. www.horseandhound.co.uk