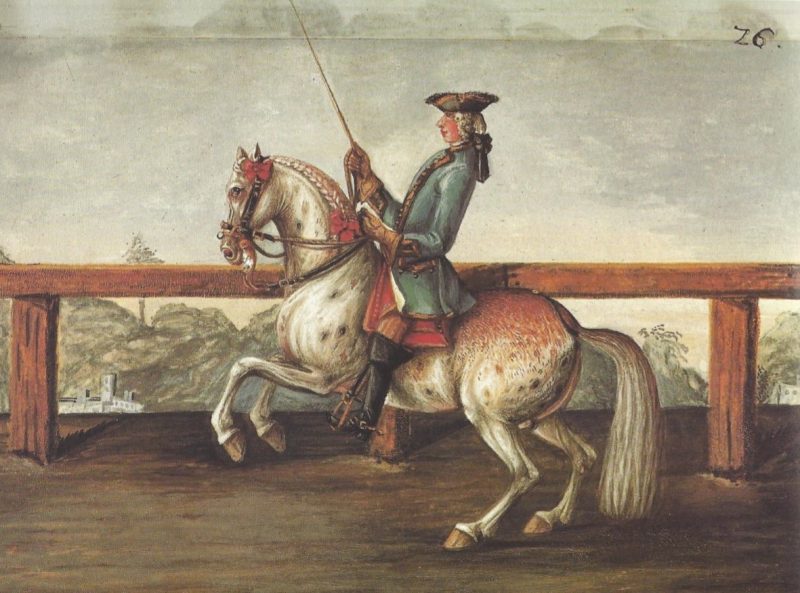 The great horsemen of the European baroque and romantic eras were undeniably aristocrats. After all, making a great horseman and a great horse—in those days—was expected to take a lifetime in the first case, and many years in the second case. Only aristocrats and nobility had the time and the money to acquire fine horses and undertake the deep study that in these times made becoming a graceful, elegant rider an important character-building experience. The German-born Friedrich Wilhelm Baron Reis von Eisenberg (1685-1764)1 was such a lucky one.

But though the Baron may have been privileged, he did not sit around eating bonbons. He became an écuyer and trainer renowned throughout Europe, a recognized expert on haute école, a widely read author and an admired artist who illustrated his own literature. Fortunately for us today, d’Eisenberg left a wealth of instruction and artwork that has not only survived time but is enjoying an energetic revival.

The Baron began his riding career as a youth in the court of the German Saxe-Weimar royal family, and then went to Italy where he was named Great Squire at the stables of the Count of Daun, Viceroy of Naples. D’Eisenberg subsequently moved to Vienna to study with Johann Christoph Regner von Regenthal, Director of the Spanish Riding School, by whom he was greatly influenced. Tinted engraving “Le Superbe” (The Superb), ‘The Passage in a Straight Line in the German Style’, from “The Art of Riding a Horse”. With permission of Xenophon Press.

Over his lifetime D’Eisenberg crisscrossed Europe as he was sought out to serve as director and first rider of important riding academies including those in Luneville, France and the Grand Duchy of Tuscany in Pisa. Such broad multi-cultural experiences he later put to use in his position as riding master to the Austrian court of the Hapsburgs, under Emperors Charles VI and Francis I.

He spent some years in England writing and illustrating The Art of Riding a Horse, Or, Description of Modern Manège in its Perfection, which he dedicated in a first edition to King Louis XV of France, and in a second edition to King George II of England. Although d’Eisenberg published other works over time, The Art of Riding a Horse became a classic and appeared over the decades in several languages. Tinted engraving “Le Conquerant” (The Conqueror), ‘Another Manner for Courbettes’, from “The Art of Riding a Horse”. With permission of Xenophon Press.

At this time in history his audience is very familiar with academic horsemanship (the Manège), so d’Eisenberg takes pains to illustrate and describe the perfection of each exercise. His style is precise and instructional, pointing out the logical, programmatic sequence for training each exercise. Notably, there is only one correct way to train and perform anything, and at the end of each lesson, d’Eisenberg charmingly tells various versions of…“And that is all there is to know about [this subject].”

That d’Eisenberg is a true connoisseur of the finest of fine horses is beyond doubt. He raptly evaluates, analyzes, and compares and contrasts horses in terms of their country of origin, size, shape, natural abilities, gifts of personality, character and temperament, and even color. Many of the horses he uses as a subject are not just known to him, but he or his mentor von Regenthal have trained and ridden them. D’Eisenberg glows with admiration for, pride in and satisfaction with these horses; his great joy taken in them is truly an example for us today.

D’Eisenberg, like von Regenthal, is very concerned that the approach to training and riding a horse should be compassionate and careful. The initial treatment of a young horse should be sensitive so as not to overwhelm and prejudice him against future training. D’Eisenberg speaks of taking care and time to build the horse up in stages, physically, mentally and emotionally. He warns against asking horses for something they cannot naturally do, or easily do, too early. Black and white engraving “Le Royal” (The Royal), ‘The Rein Back of the Horse with the Cavesson’, from “The Art of Riding a Horse”. With permission of Xenophon Press.

That said, actual resistance on the part of the horse has a bottom line and an immediate, practical consequence; “It may be necessary to shake the switch, or give him a good whack,” the Baron scolds. Yet on the highest level, d’Eisenberg seeks not a fight, but instead an equitation ever more elegant and beautiful, a horse showing greater obedience, skill and power…in the end, a picture that will appeal to superior taste.

On its own, in The Art of Riding a Horse the Baron leaves to us a superb technical manual that brings together and blends science, craft and art. What makes today’s English edition translated by Sherilyn Allen VMD and published by Xenophon Press even more valuable are the generous and very educated translator’s notes on almost every page. Here Dr. Allen interprets d’Eisenberg’s text in the context of his own time, creating a bridge for today’s reader and rider and making the instruction more accessible.

The work of so many great classical masters has been lost over time. To have the creative works of Baron d’Eisenberg at our fingertips almost makes him seem alive and well…a real character and mighty classical master to enjoy and learn from, who still leaves to us the potential of real high-level instruction, and offers tremendous inspiration for modern horsemen.