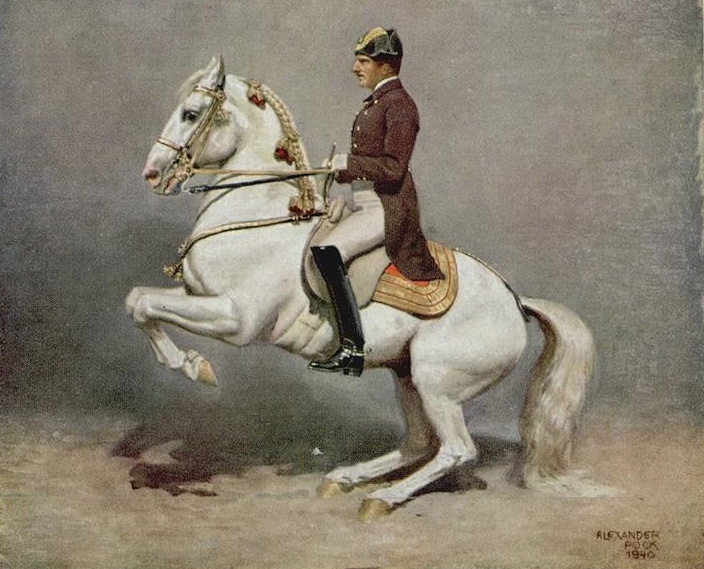 When as a child I first read Marguerite Henry’s wonderful book about the Spanish Riding School in Vienna, titled “The White Stallion of Lipizza,” equally wonderfully illustrated by her creative partner Wesley Dennis, I was fascinated with the idea of a supremely orderly program of learning and teaching a venerable and highly cultivated horsemanship.

This was no haphazard affair like the way my friends and I learned to ride…we were told to get on, kick to go, pull back on the reins to stop and neck rein. Then off we tore with our kind-hearted and forbearing mounts, all asses and elbows for too long as we learned the hard way.

Not at the Spanish Riding School where there were high standards and high expectations of everyone involved…students, teachers, and horses alike. These equestrian arts were believed to represent a pinnacle of Austrian culture, and had been practiced and admired for hundreds of years, becoming codified in a highly evolved system.

The white stallions of Lipizza were Austrian national treasures, bloodlines as carefully and thoughtfully crossed as in a laboratory, to be carefully nourished, trained, respected and honored. Each new student was just as carefully chosen and expected to start at the very bottom, mastering every job in the school in a meticulously monitored progression. From cleaning the stalls, barn, arena and tack and feeding the stallions, the honors of grooming and tacking up followed. The mane and tail must be combed with the fingers, the grain sifted by hand to check for stones. One day when they had perfected their tasks, they were allowed to don a rider’s uniform and began a two-year longeing program before they were ever allowed to touch the reins. And only then after years could the teaching of equitation truly begin. Their years at the school would be the careful study of their lifetime.

Can you imagine the humility, self-discipline and dedication required by such a protocol, mastered in the right spirit? To thoroughly learn and embrace and accept the support of the unchanged teachings of hundreds of years, in a hopefully never-ending, orderly chain of masters and masterful students?

In 1940, before World War II nearly destroyed the cultural treasure known as the Spanish Riding School, this perfect levade performed by a Lipizzan stallion and rider captured by Alexander Pock models the concept of beauty for many reasons.

It tells us the horse and rider were carefully chosen to be scholars of a classical horsemanship hundreds of years old. It tells us that both the horse and rider were carefully schooled and exercised and strengthened in an orderly, progressive fashion to take on their tasks, separately and together. It shows us that when two individuals from two vastly different species join their forces, and their authority insists on upholding high standards, and all agree on the importance of an outcome, that something with real meaning and of fantastic beauty can happen.

In this time of pandemic-engendered disorder and imbalance, I see not only worrying stories of the careless people who put themselves and others at serious risk, but heartwarming stories of many strangers all over the world making themselves of service to those who are vulnerable and in need, trying to help right the listing boat.

And as we gradually re-create order and balance, better days will return.  And I believe we will have a new understanding of what we once had that we might have taken for granted, and a new appreciation for what we still have…our loved ones, our friends, our communities, our countries…and our Family of Man.

[NOTE: This post does not refer to politics but to philosophy. Please, if you comment, avoid the subject of politics. Thank you!]