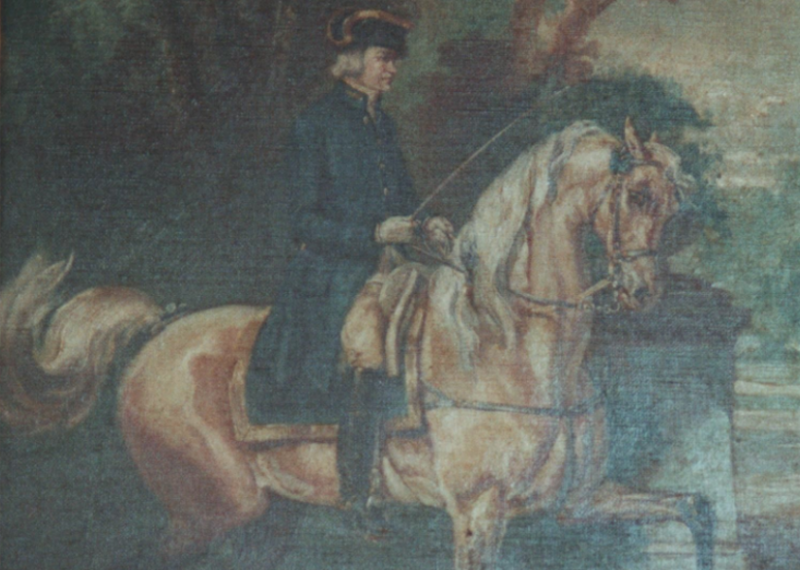 “You should have seen this noble old man with silver hair wearing his classic manège hat, sixty-five years old! This venerable Count of Abzac gave these lessons with a clearness, a precision, an air of court, which filled the spectators with admiration. Mounted on a horse “Isabelle” [in Europe refers to pale palomino of different shades] with white mane and tail, academically seated, he was the type of the rider-gentleman and recalled the engravings of the old squires at the same time as he was the noblest impression of perfection that can be achieved, even at an advanced age in academic riding!”

The legendary horseman Pierre-Marie, Vicomte (Viscount) of Abzac, was born September 10, 1739 in the family château in Limayrac, Périgord, France. In 1756, he joined the Pages of the Grande Ecurie of Versailles, where he was trained by Jean-François-André Comte de Brunet de Neuilly, écuyer ordinaire of King Louis XV, riding teacher also of Louis XVI, Louis XVIII, and Charles X, and the young Charles Eugène Prince of Lambesc Duke of Elbeuf, who would become the Grand Ecuyer in time. “In this arena, the greatest care was given to the straightness, to the elegance of the position, to the point that it was enough to see a rider coming out of this school pass to be able to say: ‘He is a pupil of Versailles.’ At that time, people used to say: ‘He who is not a handsome man on horseback cannot be a good horseman.’ ” (Colonel Alexis l’Hotte).

Made a cavalcadour rider in 1763, d’Abzac became an écuyer ordinaire in 1770, with responsibility for the second riding school, his former master Brunet de Neuilly still directing the first. On December 30, 1773, the Vicomte d’Abzac took over the complete command of the royal riding school of Versailles where he further established his brilliant reputation. Succeeding his own master Brunet de Neuilly, it was the Viscount of Abzac who gave riding lessons to the greatest figures of the court: the Count of Provence, future Louis XVIII, the Count of Artois, future Charles X, and Louis XXI.

Pierre-Marie was made a knight of the royal order in 1781, now a Comte (Count) of the family holdings, handed over his charge to his brother Jean, and retired to Périgord at the Château de Limeyrat, which he had rebuilt. During the Revolution, he emigrated abroad to teach in foreign courts. In 1802 he received an amnesty certificate which allowed him to regain his rights which, like all the French nobility and aristocracy, had been removed, and he took advantage of the decree of the First Consul to return to France to his château.

There he devoted himself to breeding fine horses in a private capacity. When King Louis XVIII returned from exile, the two brothers, Pierre-Marie and Jean-François d’Abzac, presented themselves to him. From August 1814, when Pierre-Marie d’Abzac was 75 years old, both brothers were appointed chief squires at the restored School of Versailles: the elder, director of the first manège; the younger, director of the second. In 1815 they were awarded high honors including the Cross of Saint Louis, the Legion of Honor and the rank of honorary colonel of the cavalry.

An amusing story about one of d’Abzac’s students follows. Count Antoine Cartier d’Aure (1799-1863), an 1817 graduate of the military academy at St. Cyr, apparently was the despair of d’Abzac’s existence.  D’Aure was a naturally very talented rider, but with a taste for speed and outdoor riding, which was not the way of the manège. Apparently he could not be convinced to slow down and ride in refinement. The story goes that one day as d’Aure sped by on his horse in the manège, d’Abzac turned to an observer and asked “See that rider?” The observer replied that he did. “Don’t ride like that,” d’Abzac replied with emphasis.

Nevertheless, in 1821, d’Abzac appointed d’Aure ordinary squire and instructor of the Pages. For six more years Pierre-Marie d’Abzac trained horses and taught riders, though himself steeped in tradition, regretfully stripping French cavalry riding of the now irrelevant part of its academicism. D’Aure went on to become the chief trainer of the Riding School in Saumur (1847-1854), appointed over the other well-known non-military master of the time, François Baucher.

The day before or two days before his death, d’Abzac had worked his two horses in dressage at the manège. He had saddled three kings of France, trained horses and riders by the hundreds and the squires by the dozen. He died in Versailles, in his residence of the great stables, on February 10, 1827, without posterity.

The d’Abzac brothers have remained legendary names, perhaps the most perfect of this academy of Versailles which seems to have wanted to be embodied in them before collapsing under the destructive breath of the Revolutionary hurricane. [Painting uncredited due to inability to find details.]