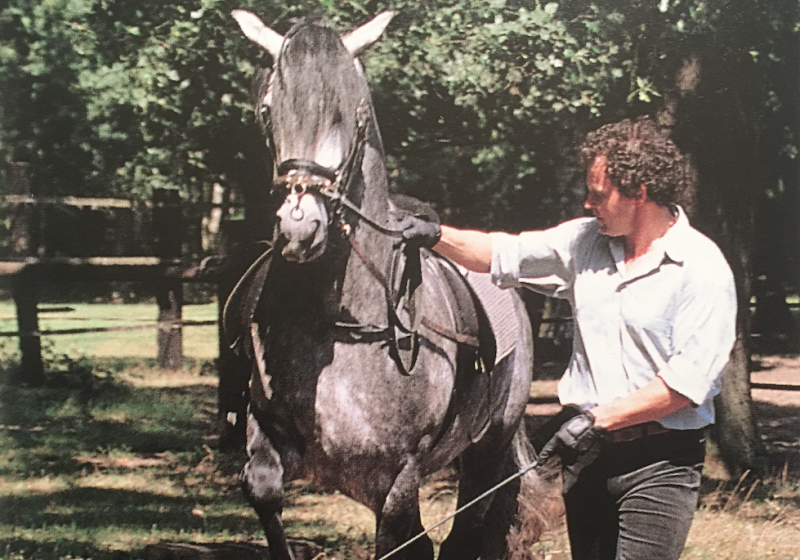 I’ve been following German classical specialist Richard Hinrichs since his beautiful DVD and its companion book “Schooling Horses In-Hand” were published in English in 2001 by Trafalgar Square Books here in the U.S. [The DVD is on the list of Recommended Reading on Longeing for the Fourth Level on the USDF website, to this day.] If you have not heard of Richard Hinrichs, he is literally the product of a lineage of hundreds of years of European classical teaching. But twenty years ago, in all my years of study of horses and riding, I not yet seen anything like these classical training principles. In fact, the beautiful photography of the mostly Iberian horses throughout both video and book were such an expected thrill to me that together, these resources served among the prompts that set me on my path to procure my own Iberian horse, who turned out the next year to be my PRE Valentín.

At this time, classical training was a more or less unknown term in the U.S., except for certain cradles of equitation in the Eastern states where European riders, instructors and trainers with formal classical training had emigrated to America in the mid-20th century. I don’t know that I had ever even personally seen an Iberian horse, either, except perhaps in a parade, decked out in some flashy costume that showcased their high-stepping hooves and ultra-long manes and tails.

As I learned more and saw the suppleness and strength created using the in-hand methods, it seemed to me it must not be argued that this training progression could be used across the disciplines to give balance and power to any horse. My interest in work in-hand found a new expression as a few years later, I planned and wrote a book on the subject myself (“Horse Training In-Hand”) after having made two trips to the Netherlands to watch a well-educated amateur trainer whose beautiful personal horses were all PRE stallions. Our collaboration resulted in a book that was continuously a bestseller in its category on Amazon for ten years.

Now that the book Horse Training In-Hand is out of print and sold as a rare book at truly exorbitant prices online, I have returned to Richard Hinrichs’ beautiful resources and have been accumulating the best copies I can find to share with readers who, like me twenty years ago, have little or no chance to see horses learning and working in true collection, in their local communities.

Richard Hinrichs’ first teachers, his parents, were both regular students of Hofbereiter Ludwig Zeiner of the Spanish Riding School. With his father orchestrating, Richard sat his first piaffe on the family Lipizzan mare at four years of age and was hooked on the spot. “The mare piaffed with me, started the levade and performed the ideal levade with me. I saved that feeling for all time at that moment.” It was this feeling in that special moment that drove Hinrichs: “That’s exactly what I wanted to feel again.” It was another 30 years before he himself had trained a horse for this ideal levade.

Denied his own childhood horse, however, he started practicing training methods he was watching at home on the family dog and even his grandfather volunteered when the dog failed to show enough interest. Riding lessons were a strictly enforced reward for good grades; two lessons for a very good grade, one lesson for a good grade, and no lessons for any other grades. Hinrich comments that there were far too many of the latter grades.

Hinrichs made up for lost time as a teenager, when he was sent to study with Werner Stemmwedel in Überlingen on Lake Constance. Stemmwedel, previously a university riding instructor in Göttingen, was a successful show jumper and taught a correspondingly varied basic training from which Hinrichs learned the feel for beat and rhythm. From there he went to the Reitinstitut von Neindorff of Herr Egon von Neindorff, whose own equestrian training had initially been undertaken by his father, and later by well known equestrian experts such as Felix Bürkner, Richard Waetjen, Ludwig Zeiner, Otto Lörke and also Alois Podhajsky.

While pursuing university coursework in law in Vienna Hinrichs became a student of both Arthur Kottas-Heldenberg (taught by Alois Podhajsky) and former Director of the Spanish Riding School (1974-1985) Brigadier Professor Kurt Albrecht.

In the decades since, Hinrichs has made himself a name as a modern master of classical in-hand work and with his wife Irene Raab-Hinrichs and his corps of riders is a very popular performer across Europe at equestrian events. He is the author of several instructional books and DVDs in the German and English languages and recently published a biography of his riding life.

In 2000 Richard Hinrichs founded the Federal Association for Classical-Baroque Equestrian Germany eV for classical riding in Hanover, an affiliate association of the German Equestrian Association (FN). The aim of the institute is the continued revival and spreading of the classical principles of equitation as an essential component of nature- and culture-oriented quality of life in our increasingly technically advanced age, and the annual examining and licensing of trainers. For more information see: www.IfkR-Hannover.de

Albrecht writes in his introduction to the Hinrichs book “Schooling Horses In-Hand,”: “The book is not only worthwhile for purposes of study and expanding knowledge, but it is also a source that we can use with great pleasure to achieve happiness as riders. It deserves to become a valuable part of present day equestrian literature.”