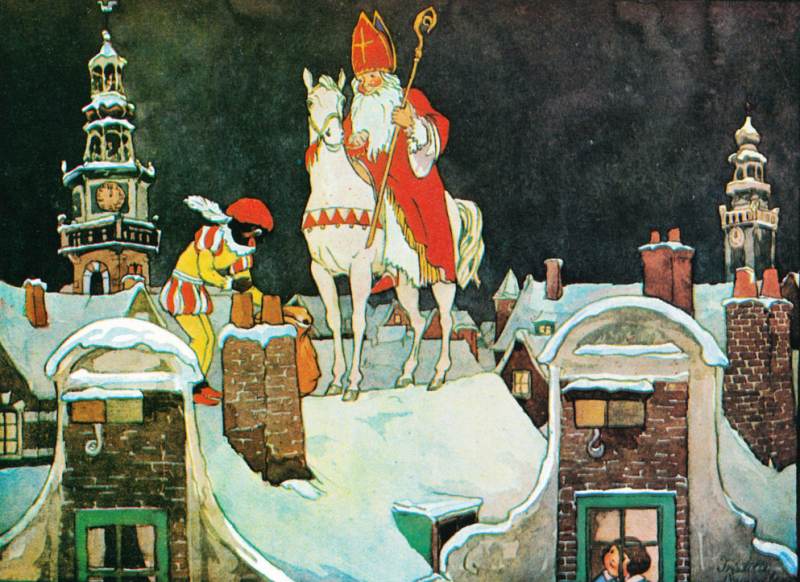 Strictly speaking, this post about the flying white horse Amerigo, who makes the overnight gift deliveries of the Dutch and Belgian holiday character “Sinterklaas” possible, is belated as Amerigo does his thing on December 5th. But having just found out about him, I wanted to share a little bit of the story since after a lifetime of being used to nine reindeer pulling Santa Claus’ sleigh, seeing the image of a horse standing on a roof gable was utterly charming.

But, Sinterklaas is not to be confused with Santa Claus. Sinterklaas lives in Spain during the non-holiday season and sails the good ship St. Nicolaas to Amsterdam with his gifts and helpers, one of whom is Amerigo. I wonder if Amerigo is an Andalusian? Another of Sinterklaas’ helpers is Piet, who is part-executive assistant, part clown, and part athlete who spends the night of December 5th helping Sinter keep straight which children get candy, gold coins and toys and which get bundles of switches or coal. Piet is covered with soot from the chimneys because yes, he gets to be the one to climb down and back up chimneys while the snow white Amerigo stands elegantly on the rooftop carrying Sinter and staying clean. Here they are, a sailing. Here they are disembarking the good ship St. Nicolaas. As soon as they disembark, Sinter and Piet mount up and Piet starts handing out goodies. Sinter is too busy holding the reins and his bishop’s staff and looking magnificent to have time to help.

I guess they arrive at the Low Countries around the end of November and hang out, getting their December 5th odyssey organized. Wherever Sinter, Amerigo and Piet go they are surrounded with packs of children hoping for handouts. Apparently some of those children are sweating it out, wondering if they are in the naughty category (again). Sinter loves children but he has the approach of a disciplinarian, and keeps close tabs on all the children in the Netherlands and Belgium. Sometimes Piet rides a horse, sometimes he rides a donkey, and sometimes he walks alongside Sinter and Amerigo carrying a surprisingly small sack of holiday supplies. Sinter rides out, teasing the children with a big bag of candy and gifts. Yep, pretty sure Amerigo is an Andalusian. The night of December 5th comes, and the children are waiting to see if they can spy Sinter, Amerigo and Piet in the rooftops. Sinter and Piet do a fair amount of spying themselves, looking through windows and even down the chimneys to see what the children are up to. The children put out their shoes with a little hay and carrots for Amerigo. Piet is quite the tease, isn’t he, pretending to eat Amerigo’s carrot himself? He is scaring that little girl in the house to death because if Amerigo doesn’t get his carrot from her shoe, he will fly right past her house and Sinter won’t leave her presents! Amerigo, being an Andalusian, has a health condition called Insulin Resistance so he is not supposed to have those sugary carrots except this one night in the year, when the rule is broken because of all the flying exercise he does. He looks plenty forward to his night of carrots! Piet, give the poor horse his first carrot and stop fooling around! Poor Amerigo. Look at his face! This is not an easy job, heaving these two people and all that stuff up in the air.

(Above illustration by  Maud & Miska Petersham, 1926, from “Tales Told in Holland”, edited by Olive Beaupré Miller) Much easier to fly like this. See what I mean about all the spying? Piet is peeping in the window! Naughty Piet. Last year Piet made some delivery mistakes so Sinter is micro-managing him now. Amerigo is smirking. He and Piet have a collegial enough working relationship but there is some occasional rivalry. Amerigo, be bigger than that! Cookies? Gold coins? Candy? (I know which one I would vote for…) Come on, Amerigo, I know you’re tired but you can do it! Here’s the last stop and then we’re done… We’ve been snowed upon, we’ve been rained upon, we’ve been blown by wind. The streets are quiet and empty. We’re wet, cold, tired and hungry. But, good job, guys! Amerigo, have one last carrot. Back to the good ship St. Nicolaas tomorrow and home to Spain.