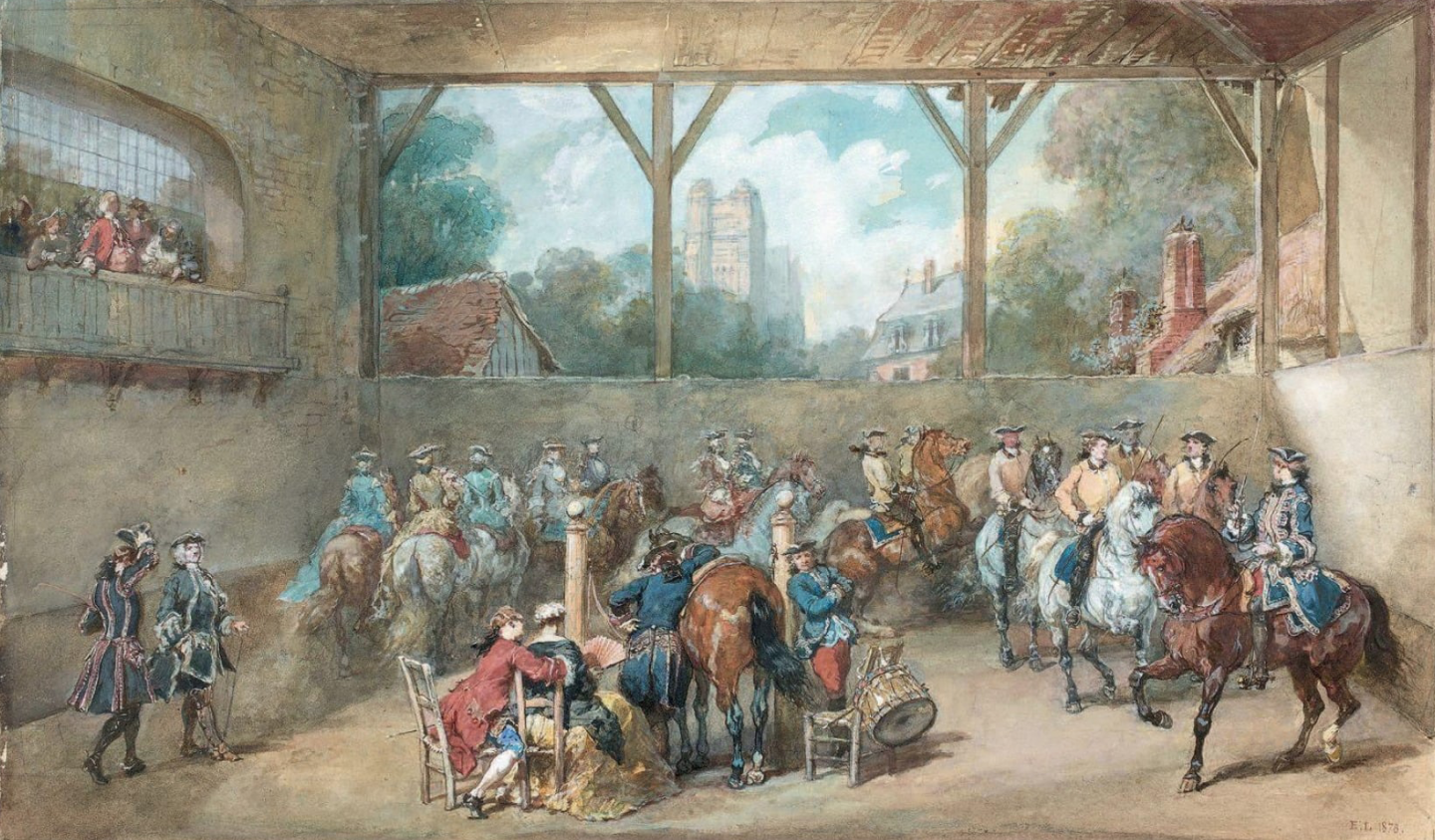 Since it first floated by me, I have loved this charming painting of riders and noise-desensitizing helpers carrying on in a small manège somewhere in time. The drummer is taking a rest, the trainer is comforting his horse in the pillars. A young couple are managing to court in the middle of it all as the amazones and cavaliers continue their tight circles together on their supercharged horses. I had the brilliant idea of doing a reverse image search for it, and found one instance of it on the entire internet. Yet that was enough to find the artist’s name and further search unexpectedly unlocked a whole treasure trove of equestrian art.

The French-born Eugène-Louis Lami was classically trained and multi-talented. Not only did he become a prominent and prolific lithographer and artist, but he worked in interior design and even costume design. He was considered a premier history artist and was commissioned for his sophisticated art and design services by luminaries such as King Louis-Philippe I, James de Rothschild and the Duke d’Aumale. His long career found him traveling widely both geographically and in his imagination, which explains how a 19th century artist can so authentically and enjoyably transport us back to the equestrian culture of the 18th century. Here we join Louis XIV and his entourage of courtiers, and one of his early mistresses, Louise de la Vallière, who has been out in her carriage. She had been brought to court and been named Maid of honour to Princess Henrietta Anne of England, sister of King Charles II of England, who was about her own age and had just married Philippe I, Duke of Orléans, King Louis XIV’s brother. Louise was blonde, blue-eyed, pretty and accomplished…and soon outgrew her role as anyone’s maid. A more sedate looking group going out in this image. Can you imagine riding for hours at mostly speed in a sidesaddle? Amazons had to be particularly adventurous because there were plenty of accidents, which was why 18th century ladies began to ride astride, even daring to do so at court. Does the fun ever stop at the Château de Versailles? Mais, non! Whether by horse, by carriage, by gondola or by foot, there’s always time for a promenade. Yet another hunt! So much hunting! Well, all this equestrian culture and all these activities (especially the hunting!) have us worn out. Let’s go home, feed the horses well, rub them down, bed them deep and let them rest. We couldn’t have done any of this without them!