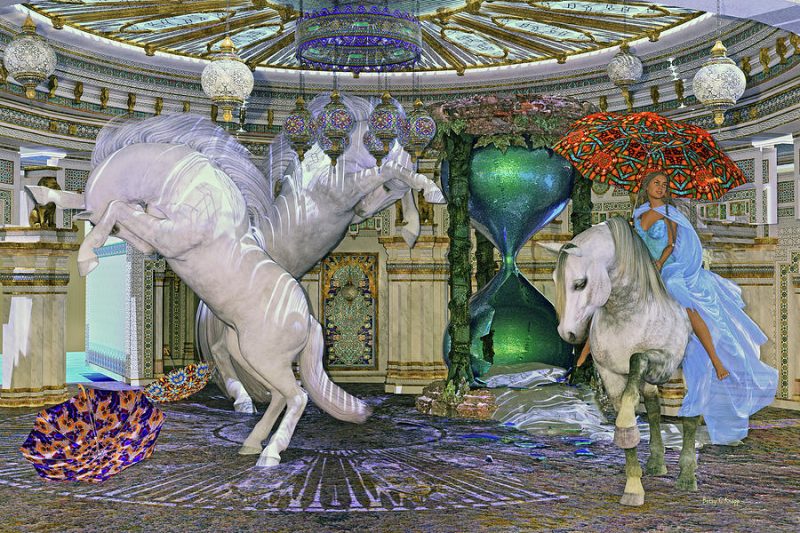 (© Kip Mistral 2022. Image “Time Escapes Me” by Betsy C. Knapp  used with permission of the artist.)

At the beginning of this New Year 2022, many of us are busy making New Year’s resolutions and other forms of road maps for our goals and what we otherwise want to accomplish during the coming year.

Note I said busy. Because being busy is the opposite of taking time.

When I look around it seems that the majority of people are engaged in busyness, activities that include a horse, or their horse, and they have a more or less proscriptive approach to the inter-relationship. The popular model is that the horse must always be submissive no matter what.

What I really like to see is people just simply spending companionable time with their horse, to deepen the bond between them.

Just simply trying to see the world through the horse’s eyes can be a revelation because horses and humans are so very different from each other, and humans rarely realize how vastly accommodating horses are in trying to understand and live in the world we construct for them. Taking time to sit with and observe how the horse interacts with his world, both his natural one, and our human world–which is artificial to him–opens up a space where the imagination and a sense of magical realism can nurture the interspecies bond. Do you make time for it?

In her wonderful digital art work, “Time Escapes Me,” Betsy Knapp provides some elements to contemplate on this subject. Is this a form of carousel where the girl sits dreamily on a well-behaved, restrained horse where the other two are showing their wild sides? Is this what she is imagining? Is she bored? Is she even conscious? I actually see this faraway look on riders’ faces from time to time.  What do you see? One of the things I am reminded of in that politely-behaving horse the girl is riding is how intelligently and purposefully horses usually restrain their real nature around humans.

Recently, I was caring for Val in his pen when another horse in his outdoor, open barn walked out of the gate left open by someone earlier, and walked across the dirt aisle into the empty pen separating a touchy-type mare and the sadly needy gelding who being in love with her, would annoy her badly more often than not.

The three horses immediately started fighting. The invader ping-ponged back and forth between the penned ones, picking a fight on each side. Screaming, rolling eyes, ears flat, screeching, rearing, biting, kicking…dust flying…they were like dinosaurs with their savage faces and massive opened jaws, leaping around with suddenly huge muscles. I wasn’t about to go into that chaos, so quickly shut the gate on the intruder so he couldn’t run out and get loose at the facility, called over the on-site manager and watched a little anxiously.

Until he arrived to grab the errant one, these superpowers with 3,000 plus pounds between them looked like they were really going to kill each other, yet staged an on-the-spot minuet performance that was mostly smoke and mirrors. The huge bites hit the air, and the ones that hit didn’t close the teeth to take a chunk, they were allowed to bounce off the target. When the dust settled, none of the three had a wound on them.

All the while, I thought, they could do that any minute to any human and pulverize them into matchsticks. But they don’t. Or if they do, it is so rarely and possibly would be richly deserved and not otherwise.

Because horses understand we can’t survive what they dish out to each other. And when they can, they refrain.

Is it not a miracle that horses do so much for us and not against us?

Is it not amazing how much we expect them to do for us?

Especially when many if not most people today seem to know little about the nature of horses at all, or bother to learn who their horse is before they start trying to change him. Horsemanship is not really about learning how to ride, it is learning what makes horses “tick” and using that knowledge to put them first.