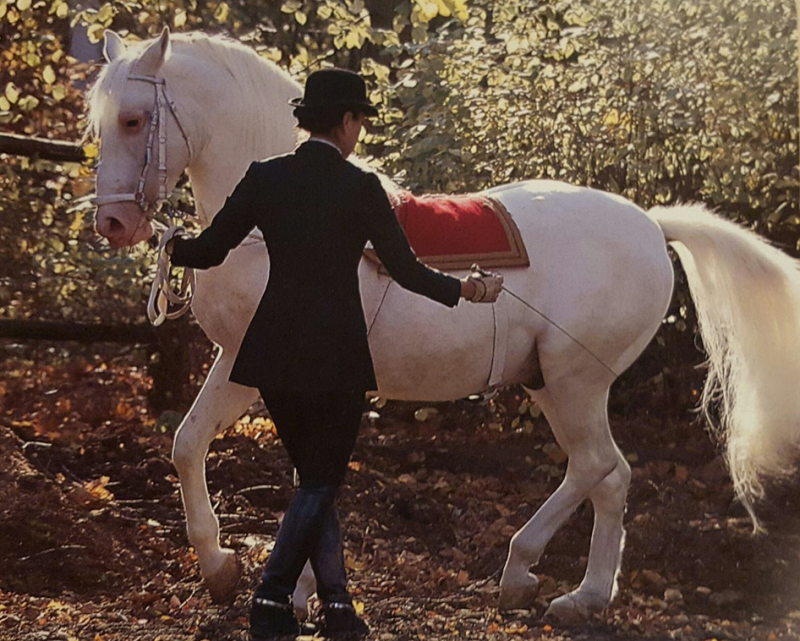 On February 14, 2018 the equestrian world lost another “Keeper of the Grail” of classical horsemanship, Melissa Laura Simms. Heiress of Riding Master Herr Egon von Neindorff, Director of Training of his Reitinstitut for over 24 years, and English translator of his German book “The Art Of Classical Horsemanship”, Melissa passed away in Carlsbad, California after battling cancer for a good portion of a year.

Melissa Simms, the daughter of a Marine Corps officer, traveled extensively with her family. The military family life and the fact that her father was a Marine Officer made it possible for Melissa to consistently have access to excellent riding facilities. As an example, in Japan where Melissa’s family was stationed for four years, her first riding instructor at the age of eight also taught the children of the Emperor. When her family was stationed in the United States, she had opportunities to also learn about multiple riding disciplines. Her many experiences included hunter-equitation lessons with George Morris, western equitation lessons and also gymkhana riding classes in which she won awards including a silver buckle for first place at a Camp Pendleton rodeo.

When Melissa was 14 years old, she worked with a western trainer who had read all of the books of Alois Podhajsky. He had her read them, and from that point on a fire had been lit in her soul…she would be a dressage rider someday. Melissa soon contacted the USDF asking for a list of all the best dressage schools in Europe. When Melissa mentioned in these letters that she was 14, some schools did not bother to write back and others told her to contact them when she was older. Not discouraged, Melissa was determined that she would eventually go to one of these schools.

Even as Melissa studied gemology with the goal of becoming a registered jeweler, she continued her riding practice with Klaus Albin, a German riding instructor in Seattle, Washington who had served his apprenticeship under Felix Burkner and Otto Lörke in Germany. Klaus had been stationed at Potsdam Cavalry School along with Egon von Neindorff. Klaus recognized Melissa to be very talented and decided to make a call to Egon von Neindorff about this student who “he thought could be useful for him in Karlsruhe.” With his recommendation, Melissa Simms found her way to the Egon von Neindorff Reitinstitut, planning to stay only three months. An American girl in the land of the best dressage in the world, who knew no German, and no one at the institute spoke English, Melissa started as a mere working student. Happy to catch a group riding lesson at the tail end of a long day’s work, Melissa lived in a room above the stables accessed only by a ladder and she shared a shower with a goat. Despite the challenges, Melissa stayed at the Reitinstitut for many years to come because she was learning so much. She became one of the most integral parts of Herr Egon von Neindorff’s Reitinstitut and a prime example of a classical rider. Herr Egon von Neindorff wrote of Melissa…“Melissa Simms, who was referred to me by her German riding instructor in America, arrived at my institute as a working student in February 1982. She worked in the stable to acquire experience and received daily riding instruction. I immediately noticed her diligence, interest and understanding of horses and for the naturally oriented schooling represented in my institute. Therefore I was able to conduct intensive daily riding lessons with her on well-trained horses. She advanced very quickly.”

“Over time I trusted her judgment and gave her my horses to school, which she accomplished with feeling, knowledge and patience. At the same time she became integrated into my performances of classical horsemanship that I conducted twice a year from 1954 onward. Over the years she developed into a most important and dependable assistant for me and for the successful completion of the festival evenings. Today, she possesses the aptitude, professional qualifications and ability to school horses of all different breeds to Grand Prix Niveau and has developed a particularly fine feeling for work “in hand” and for the airs above the ground.  Because of this and the twenty years that she has been a major support to me personally and to my riding institute, I believe that she has understood, can interpret and write about my life’s work.” Herr Egon von Neindorff passed in 2004 and Melissa became the official heir to his equestrian legacy. Melissa assembled his unfinished manuscript that became the ”Die reine Lehre der Klasschen Reitkunst” published in Germany in 2004. She began the process of translating the book from German to the English version “The Art of Classical Horsemanship” and it was published in English in 2009. Melissa was really the only person who could have made this a personal interpretation, translating his book with such accuracy, for she understood his body of work in a way no one else could due to her close relationship of 24 years with Egon von Neindorff.

Since the passing of Egon von Neindorff and the two publications of his book Melissa lived between Germany and U.S.A.  She gave clinics, wrote articles and dedicated her life to promote the awareness of classical riding as taught by Herr von Neindorff. This she passed down to her students and anyone who wished to listen. In this quadrille, the other riders look to Melissa, their lead rider, to keep their alignment.

Although it is difficult to do her wisdom and extraordinary talents as a teacher and trainer of classical horsemanship justice, Melissa’s memory will live on through her dedicated students, as a voice on the wind. Tressa riding with her mentor Melissa Simms, both riding Lusitanos. One of Melissa’s training techniques was to ride behind her students. (Photo credit Lia Segerblom.)

As she would say “Let us keep counting the piaffe steps and not lose sight of the future.” Melissa embodied the pure art of classical horsemanship with an Old World grace that for the most part can now only be read about.  Her students of many years hope to bring this knowledge forward into the future, for the sake of the horse, in memory of their beloved riding teacher…