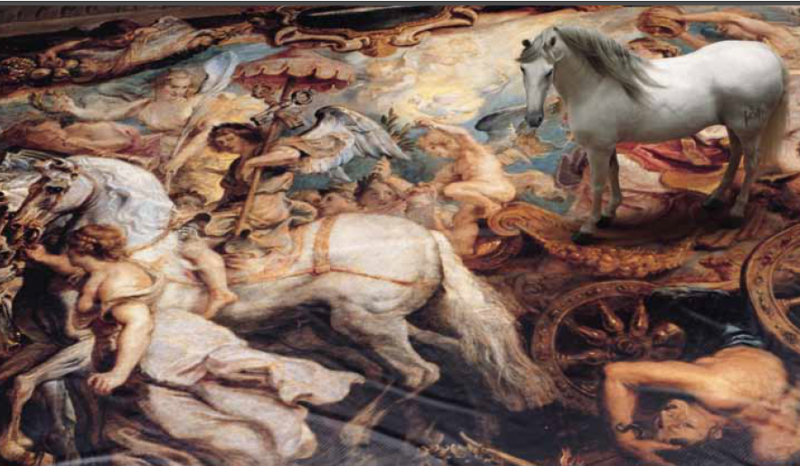 It seems that Peter Müller Peter does nothing in a small way. Even his award-winning, oversize, magnificent book “Caballos Con Arte” (Horses with Art) is the coffee-table book to end all coffee-table books.

An internationally acclaimed advertising photographer, Peter has executed major campaigns for a wide-ranging list of clients including Coca-Cola, De Beers, Smirnoff, Credit Suisse, Rolex, Spain’s National Tourist Board, Iberia Airlines and more. His photographs have been featured in magazines from Vogue to Playboy. Though honored with numerous awards in his career, Peter admits that his biggest passion is horses. Peter describes the inspiration for his book and artistic masterpiece Caballos Con Arte (Horses with Art) which won Spain’s esteemed Gold Lux Award. The stunning photographic series now forms a touring exhibition entitled Pureblood Reflections which has already traveled Spain to Istanbul, Qatar and recently, Switzerland.

“I am fascinated with the grace and nobility of the pure Spanish horse,” muses Peter. Though Peter was born in Switzerland and studied architecture and fine arts in Zürich, he has lived for many years in Madrid. “My priority is to communicate the connection between the Spanish pureblood horse and art, which has been portrayed by such great masters as Velazquez, Goya, Rubens, Botticelli, Van Dyck, Carpaccio, Franz Marc and August Macke. To me, it was a matter of combining classic paintings, and modern paintings, and the beauty of this actual horse,” he explains. “For this project, we researched paintings in the major museums in Madrid. We were given special permission to photograph these priceless works, print them in giant form and use them as backgrounds for flesh-and-blood horses, some of which were bred by my friend and colleague Alvaro Domecq. These horses are extraordinary animals.” Cover image of the issue in which this article appeared is also by Peter Müller Peter.

Setting up a large-scale indoor photo shoot of live horses must have been quite an undertaking. “As a commercial photographer, what I have mostly been doing is a lot of people and action shooting. It’s the same technique to light people that you use to light horses, you just need a much larger area. So I lit and photographed the horses like I would photograph a person,” recalls Peter. “We rented an area of 1000 square meters (10,764 square feet) in Seville and built our sets in it. We used a large room next to it to stable the horses, and brought the horses back and forth. It was quite amazing that animals so sensitive to noise, bright light and closed-in spaces, unnatural to them, were so quiet and cooperative. My staff and I remained on the set for two months. It was a fantastic experience.” The prints from this exhibition, which consists of about 30 pieces in one by one meters (39 X 39 inches) and two by one meters (78 X 39 inches) are available unframed on heavy photographic paper, printed on plastic canvas for use outdoors, encased in beautiful methacrylic or, interestingly, even imprinted on ceramic. “The ceramic is very expensive because the shop has to completely stop all their other work to be able to produce it,” Peter laughs. “But the effect is unbelievable, you can imagine, and of course it is suitable to install outside because it is impervious to weather. You need a lot of space for these pictures as they are quite large. You need big rooms or it won’t work. Most of the people who buy these pictures are involved with horses, and interestingly, six or seven doctors have purchased prints from this collection.” Which pieces are the most popular, we wonder? “The pieces that have the most interest are the portrait of the black stallion, then the stallion looking through the entry of the Cartuja (which was used for the cover of the book Luxury Equestrian Design), then the picture with the horses galloping in the back of the castle, and obviously the white stallion standing on top of the Rubens canvas. The backlit one [see this issue’s cover], is one of my favorite pictures. Some of the black and white portraits are popular, but it is more the art versions in the collection with the paintings of Rubens and Velasquez that people like most, very arty decorative pieces.” Pure Blood Reflections Exhibition, Qatar National Theater. Behind the scenes at the photoshoot in Seville.

Peter is currently exploring the idea of bringing the Pureblood Reflections exhibition to the U.S “I would really love it,” he says. “My current new project is the Müller – Franco Connection, a collaboration with the famed Spanish artist Carlos Franco, who integrates my photography with his mixed media paintings. I have just introduced two of Carlos’ pieces at the Pureblood Reflections exhibition in Switzerland and we will have a collection ready for exhibition by the end of this year. These are very fresh, colorful, fantastic paintings and people have been very enthusiastic. There are many places in the States where these exhibitions would be interesting….Miami and Los Angeles for instance. I also offer master photography classes and private farm shoots. We can produce photographs in all the unique forms that we have developed for the Pureblood Reflections prints. You can hang a life-size photograph of your champion horse on your booth at a show on canvas, or have a ceramic version installed in your barn.” Image by Image by Peter Müller Peter. Main door of the Monastery of the Cartuja of Jerez.

* The Triumph of the Church (1628) – Art at the service of the Church has in this work its maximum expression. A trio of horses led by three theological virtues, Faith, Hope and Charity, bear the triumphant chariot of the Church among the blind and indifferent. In a clever play of perspectives our horse supplants the matron, symbol of the Church in her progress towards Paradise. As it passes, the vices of the world cannot detain the procession: Hate, in the person of a man trapped under the wheels; Ignorance, in the man of Socratic features and asses’ ears in allusion to the pagan world; or Blindness, with covered eyes.

** The Battle of St. George and the Dragon (1606) – Legend has it that the city of Silene sacrificed part of its population in appeasing the ire of the Dragon that lived in a nearby lake. When finally it became the turn of the King’s daughters, he offered his riches and his kingdom in their place, but the people demanded the strict application of law. St. George, on seeing the King’s daughter trapped among the rocks and disposed for immolation, entrusted himself to Christ underthe Sign of the Cross and mounting his horse he raised his sword and met the Dragon head on, placating it with all his might. In a display of equilibrium, the horses seem to move against the current of the ocean which overs the vast canvas at the moment when he charges the beast. The scene is observed in the foreground by the horse who though he acts in obedience to his master, in his almost human look and moist eyes expresses the pity which he contemplate the Dragon, because the victory is a costly one with no joy attached to it; therein lies its grandeur.

***Circle of Juan de la Corte: Joshu in the Battle against the Amorites (XVIIth century)  – “He chose 12 men, one from each tribe, in allusion to the Signs of the Zodiac, and stopped the Sun so that one day became two. From the Heavens stones rained down against his adversaries and achieved, for Joshua, the longed-for victory against his enemies.” Impressive composition, which depicts the Biblical episode of Joshua, predecessor of Moses, in his fight to gain the Promised Land. Force and dynamics combine in the dramatic format in which Carthusian horses appear to lead the first line on the field of battle.